Utterly buttery and loaded with fruits, this vanilla-flavored bread pudding cake is the yummiest breakfast or brunch treat! Use cherries, cranberries or your favorite dried berries to personalize it. 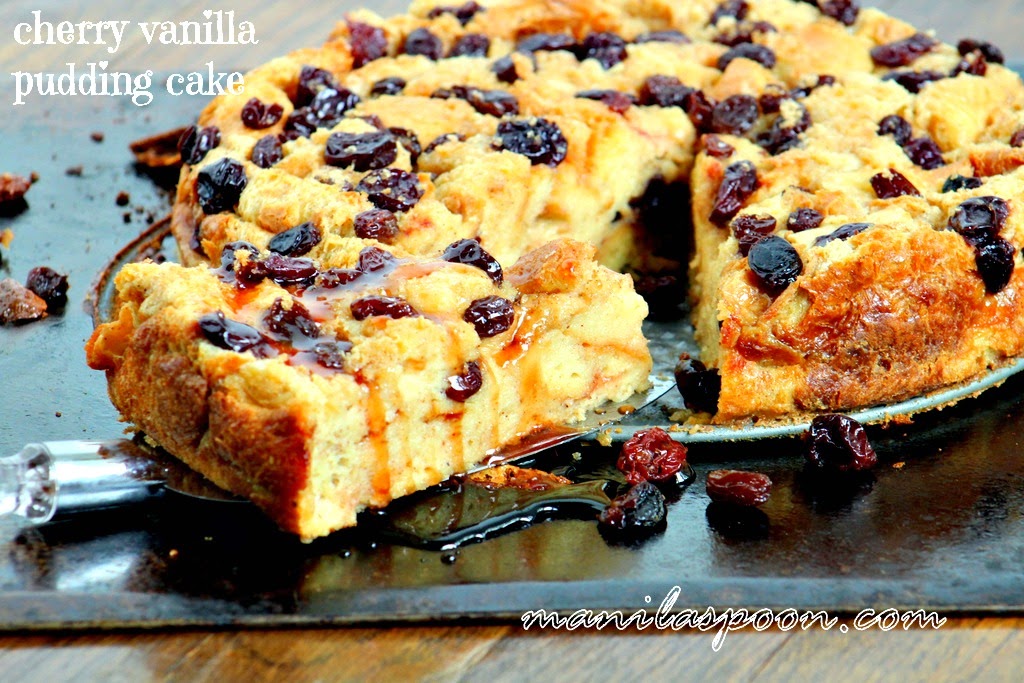 If you are Filipino and by any chance a Martial Law Baby (born in the early 70s in the Philippines) then you’d be so familiar with Nutribun. “Nutri” stands for “nutrition” while  “bun” is, obviously, a bread roll. Nutribun is the name given to a bread roll developed in the early 70’s by USAID to feed students in public schools in the Philippines. Flour from the USA (and others say from Canada and Australia, too) were shipped to the Philippines to make these bread rolls. Each bun was supposed to contain at least 500 calories and enough nutrients for a day for a child who possibly wouldn’t have had anything to eat except for the bread he or she got from school.

These Nutribuns reached my tinly island of Marinduque and the public school in my hometown  where I studied. We were literally served these (perhaps forced on us) on a daily basis for snacks during recess. I can’t remember now if they were given free, perhaps initially, and thereafter sold cheaply. Perhaps early in the week we were excited to see nutribuns but by the time Wednesday hit….we probably wanted to throw them away. With nutribuns, you either love them or hate them. Schools had to come up with creative ways to make these buns palatable. There were only two types of spread available to put on these so one can opt for a cheap margarine (with a sprinkling of brown sugar on top if you’re fortunate) or if you have a bit more money – peanut butter! Sometimes, condensed milk was used as a spread to make it taste better and then of course, Pansit (noodles) was used as filling too to turn this bun into a sandwich. If you wanted a really sweet option, the nutribun can be used for an ice cream sandwich, too. The possibilities were endless, I must admit, if you or the school were creative enough.

You’re probably wondering what these nutribuns have to do with this yummy Cherry Vanilla Pudding Cake recipe. I have fond memories of my mom making us Bread and Butter Pudding every Friday afternoon after school during my elementary years. I had this sudden recollection of those times when I made this bread pudding. These bread and butter puddings were done because there were always extra nutribuns from the school which my mom either bought or were given away for free (rather than be thrown away). My mom would allow me to mash these left-over nutribuns (actually much harder and denser than ordinary rolls so you need to work harder to soften them) into the custard and I was so happy and willing to do it. This really made Fridays special. And yes, the pudding was yummy and flavorful – my mom was a miracle worker considering these nutribuns were not exactly great and for some just slightly edible (to put it mildly!). We didn’t even have a proper oven but what to me looked like a square steel box heated by coconut charcoal underneath. So, my mom would either steam the pudding or use that makeshift oven. Who knew what temperature it had or even how it cooked the pudding but it did and I survived to tell the story!

To this day, I miss those pudding making days. I wouldn’t say I miss the nutribuns (which no longer exist) but for sure I would never forget those days when those hard buns sustained us!

So with that very long introduction, here’s a truly delectable Cherry Vanilla Pudding Cake recipe (with no nutribun!) that I hope you’ll all enjoy! 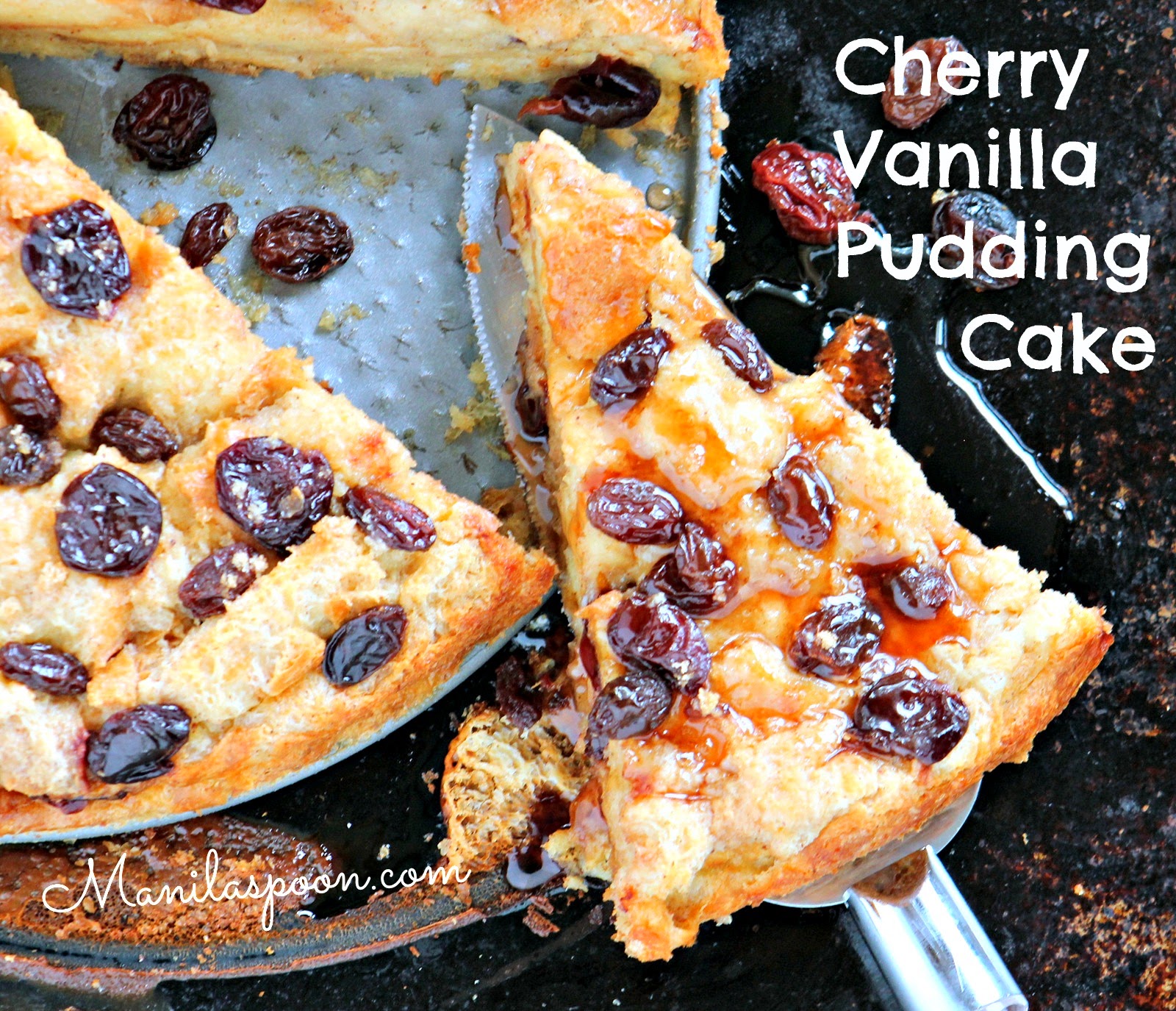 Click on the above icon to print. To delete the photos, simply click on each image to remove them for easy printing.

Bring the 1/2 cup sugar, water, raisins and dried cherries to a boil in a medium saucepan, stirring until the sugar is dissolved. Remove from heat, cover and steep for about 20 minutes. Strain the fruit and reserve the liquid. You will use this for the sauce. Place the strained fruits in the fridge until needed.

Generously butter a spring-form tin. Place it on top of a cookie or baking sheet lined with either a tin foil or baking paper. This is to catch any liquid that may drip during baking.

Place the sliced bread in a bowl.

In another bowl, whisk together the eggs, sugar, Half-and-half, melted butter, spices and Vanilla extract. Pour the mixture over the bread. Combine everything using your hands then let the bread soak for about 15-20 minutes.

Preheat the oven to 350F while the bread is soaking.

Bake for about 40-45 minutes or until set and the top is nicely browned. 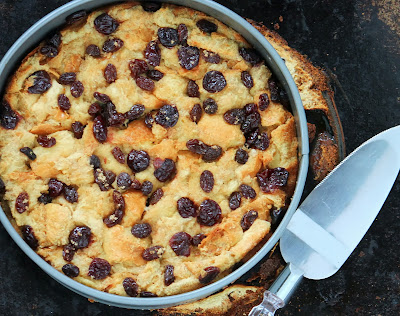 Pour the reserved liquid into a pan and boil until reduced by half or when it has reached a syrupy consistency, approximately 12-15 minutes. Drizzle over the warm cake. Enjoy!

Alternatively, you can have it with some Vanilla Ice Cream drizzled with a little bit of the sauce on top! Yumminess!!! 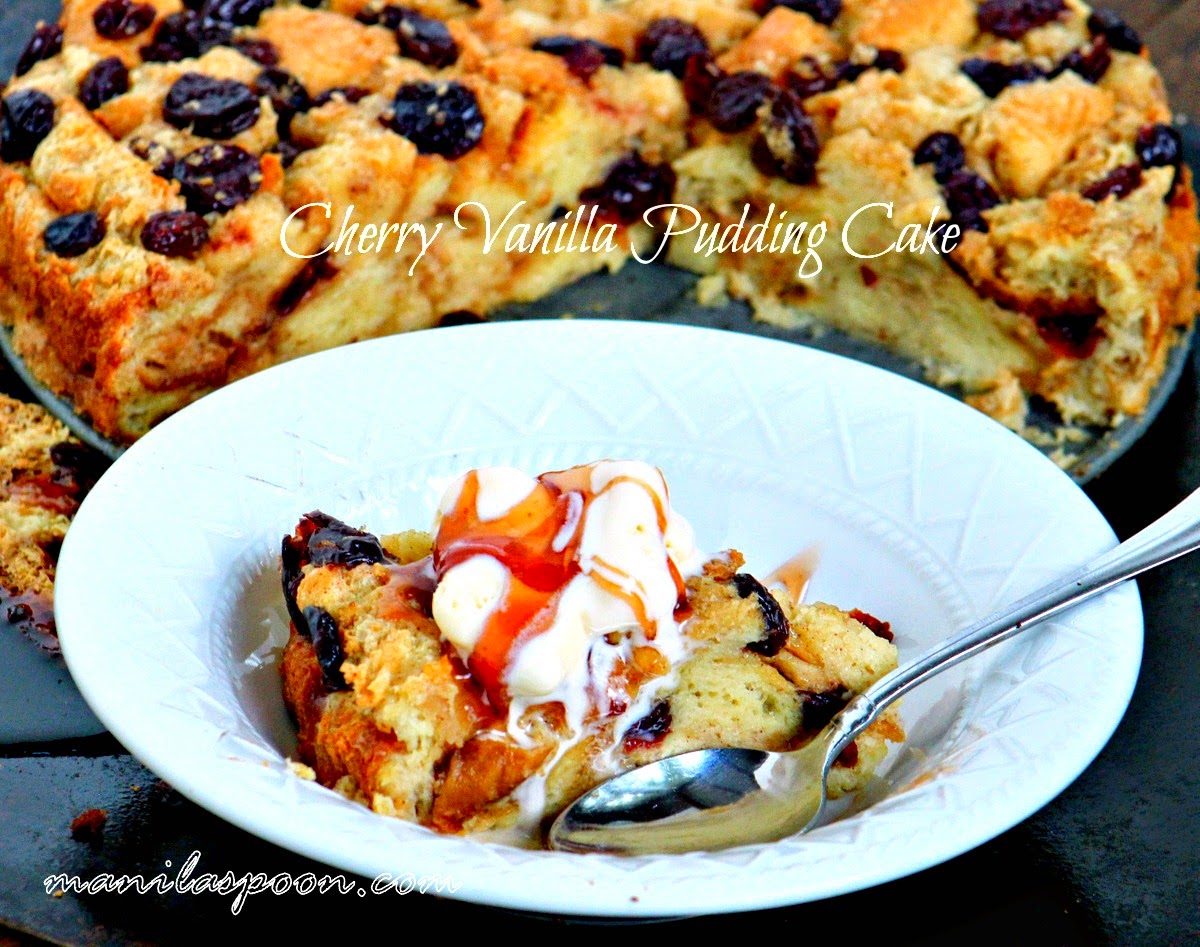