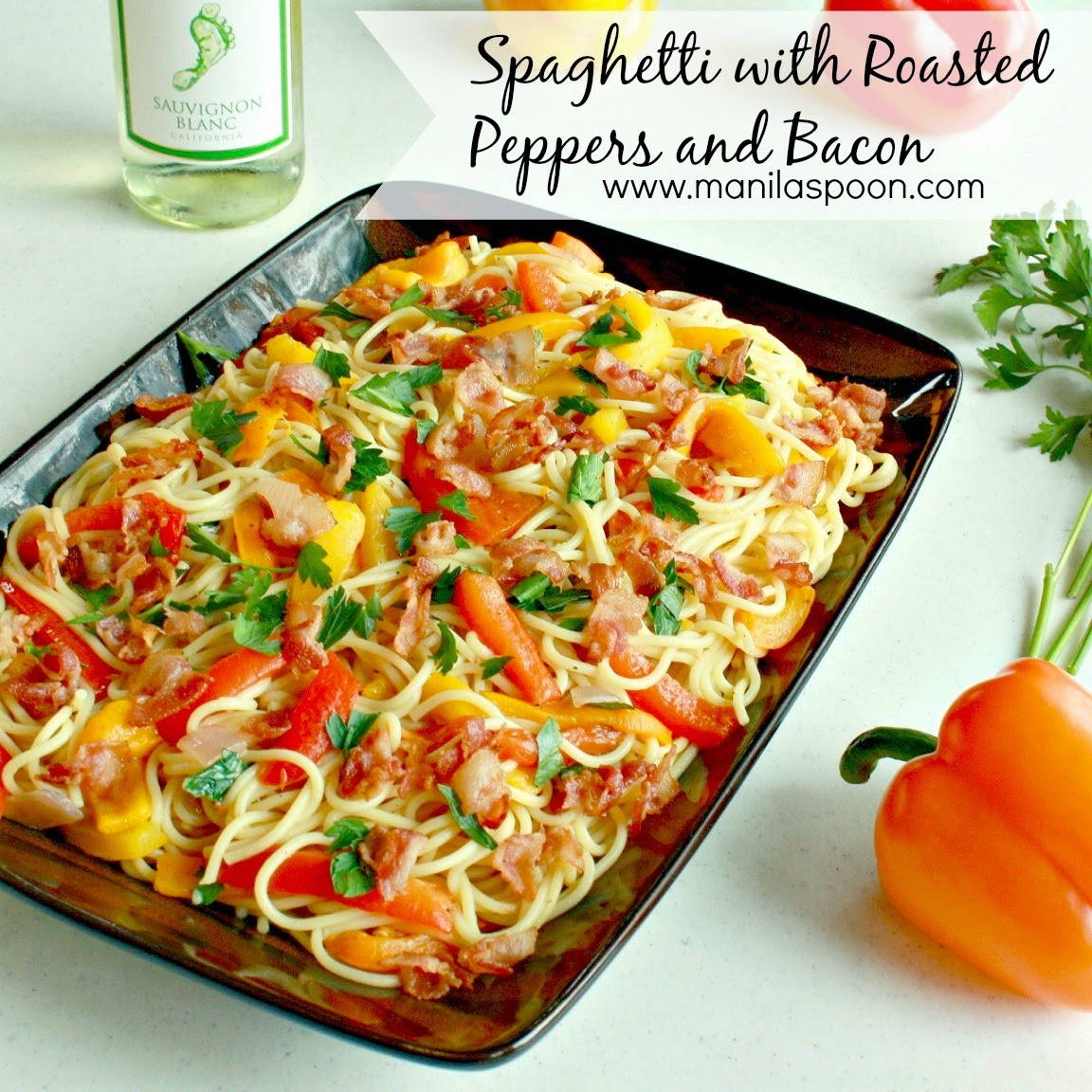 It’s summer time! That means bell peppers are aplenty. That also means they are cheaper than usual. When this time comes, I load my fridge with bell peppers ’cause they are one of my favorite veggies. Not only are they pretty to look at – love the variety of colors -they are packed with Vitamins A, C, B6 and folate. Very nutritious, indeed. In fact, I read somewhere that those who are trying to lose weight need to include bell peppers in their diet because the vitamins in them provide tremendous health benefits for both fat burning and overall good health. Ok, I am sold! 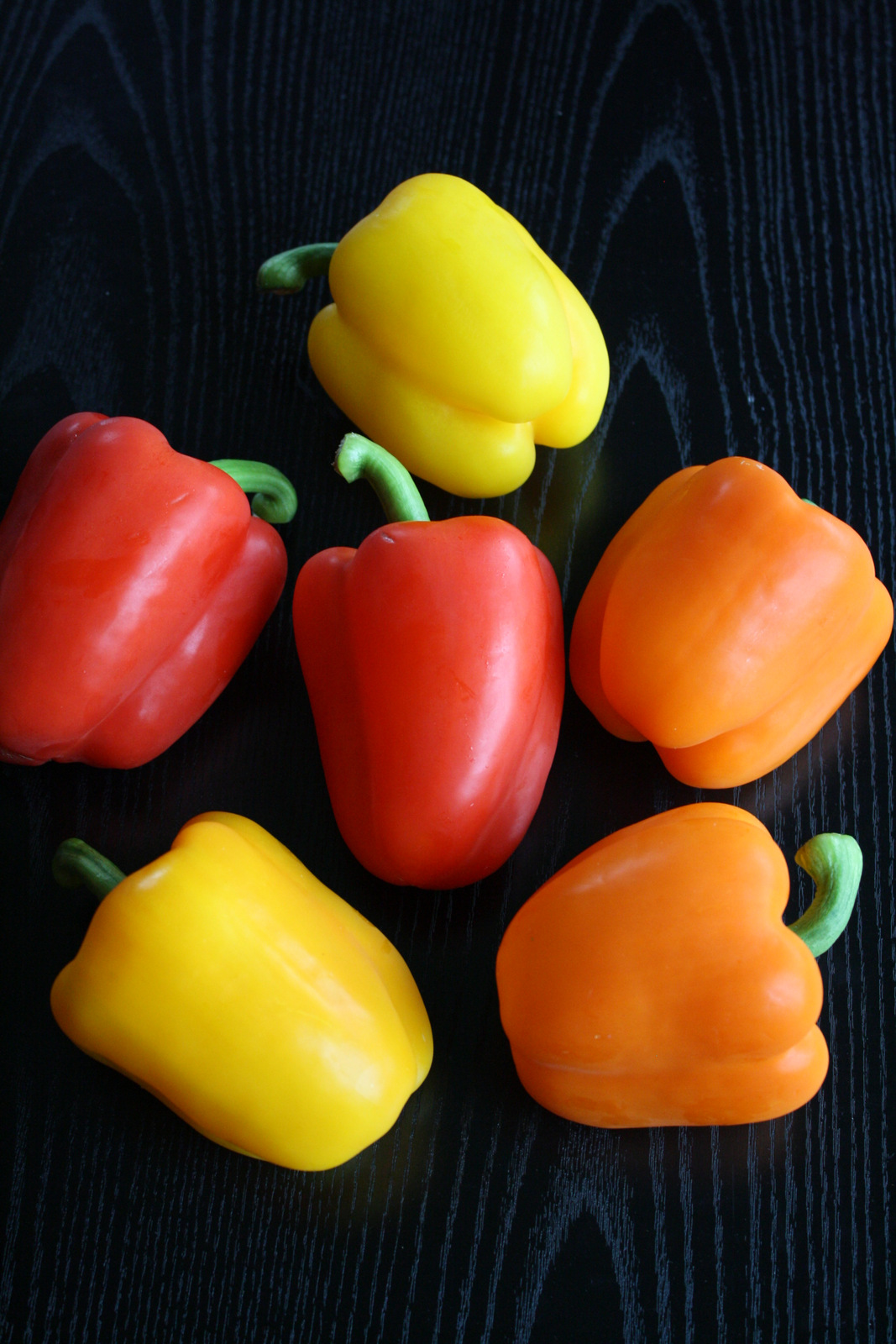 I especially love to use roasted peppers in pasta. The taste is so subtle and yet quite wonderful.

Here is the recipe, originally from Giada De Laurentiis’ book Everyday Pasta, which I have adapted. Her version is meat-free because it was used as a side dish. I wanted to make it more of an entree or a stand-alone meal, hence, I added some bacon to give it a more robust flavor. 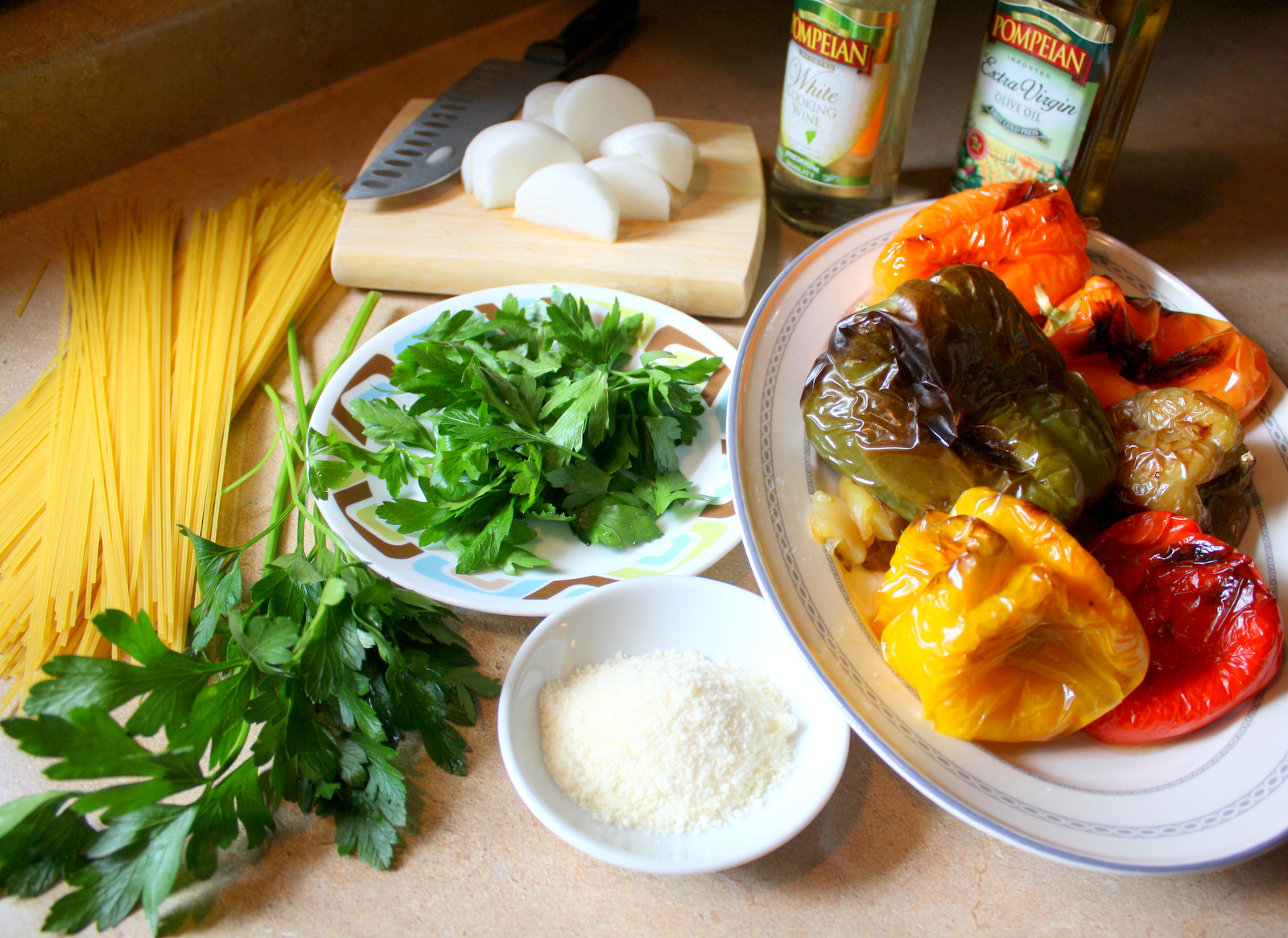 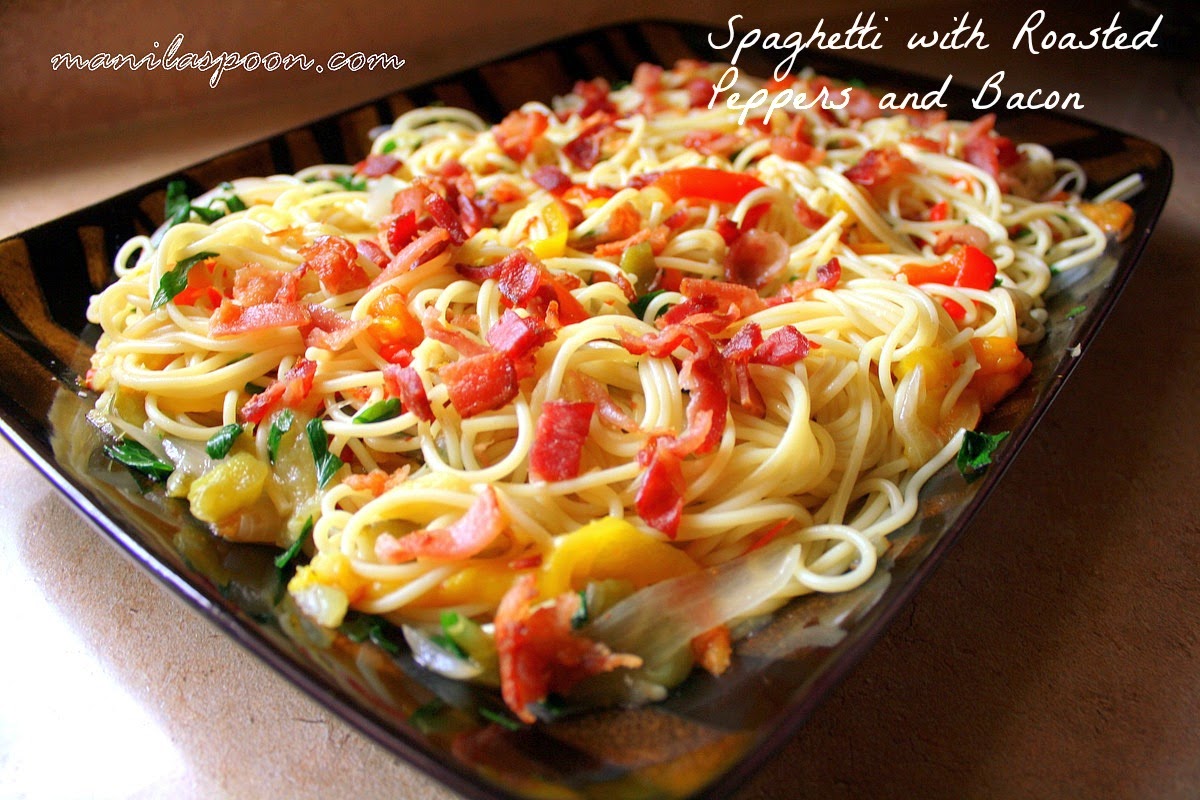 Roast the peppers under the broiler or, better yet grill them above the flame, until their skins turn brownish-black and start to pull away. Turn the peppers occasionally and roast/grill for roughly 20-25 mins (broiler method). 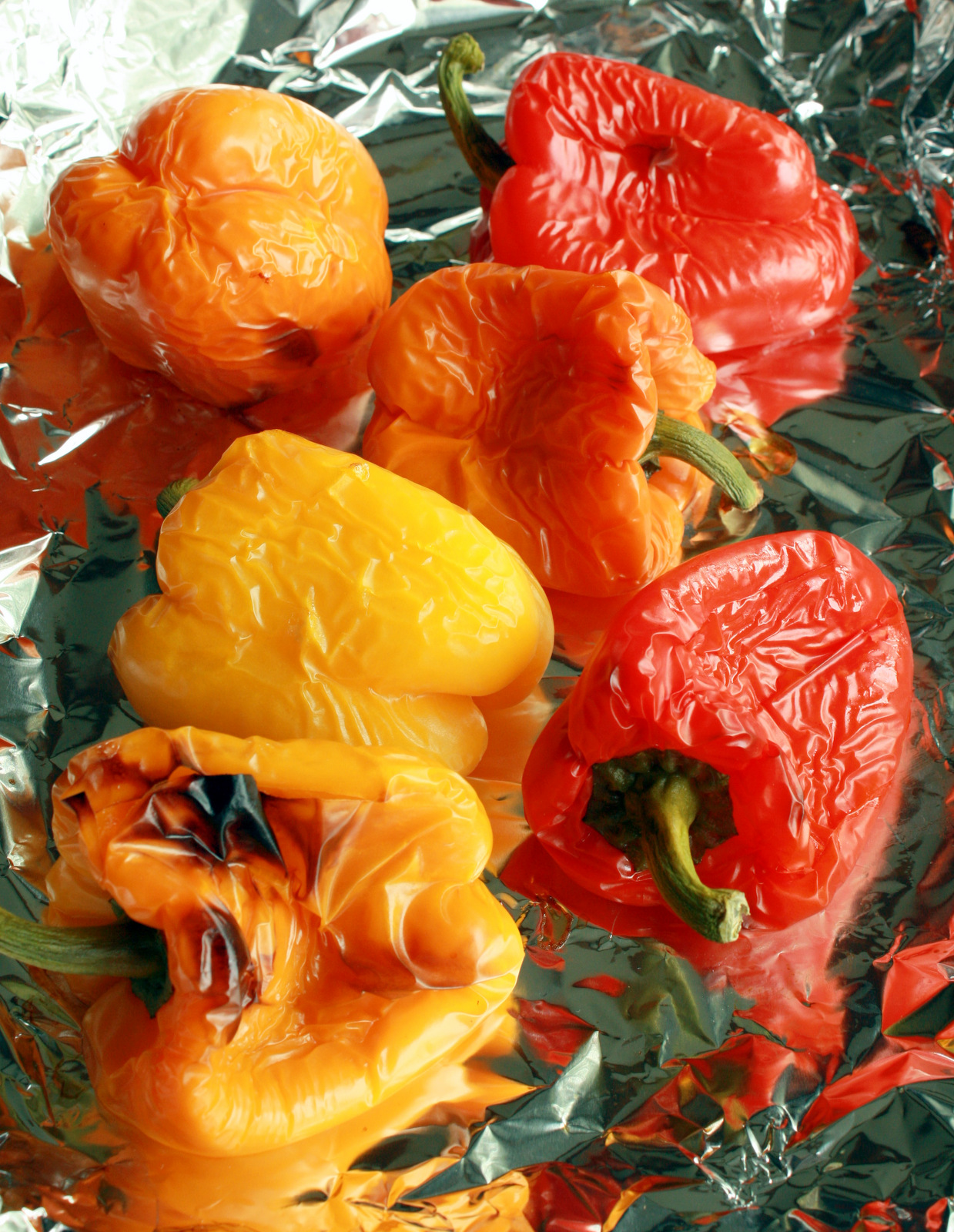 Set aside the peppers until they are cool enough to handle. Others place them inside a plastic or paper bag as it helps make the peeling of the skin easier. Remove the skins and seeds and cut them into strips.
Heat a little oil in a large deep pan. Add the bacon. Cook the bacon until brown and crisp. Transfer to another plate and set aside. You will use bacon as topping later. I remove half of the accumulated fat on the pan too but you can use all of it if you wish.

Stir in the chopped onion and saute for about 3 mins. Deglaze the pan with a little wine to remove the brown bits on it. 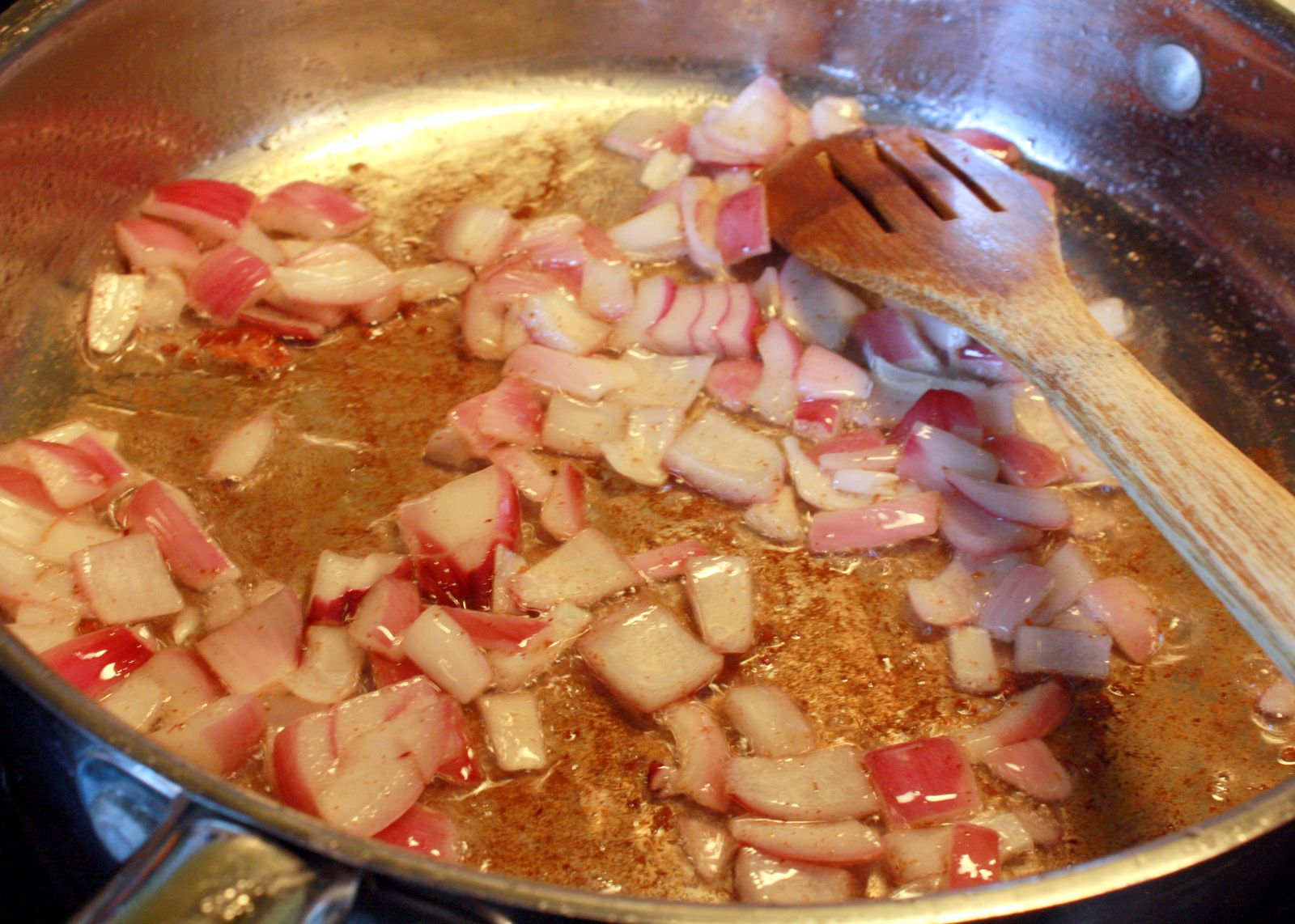 Add in the pepper strips. Season with salt and pepper and continue to saute for another 2-3 minutes. Pour in the wine and chicken broth and simmer on low heat for about 15-20 mins. 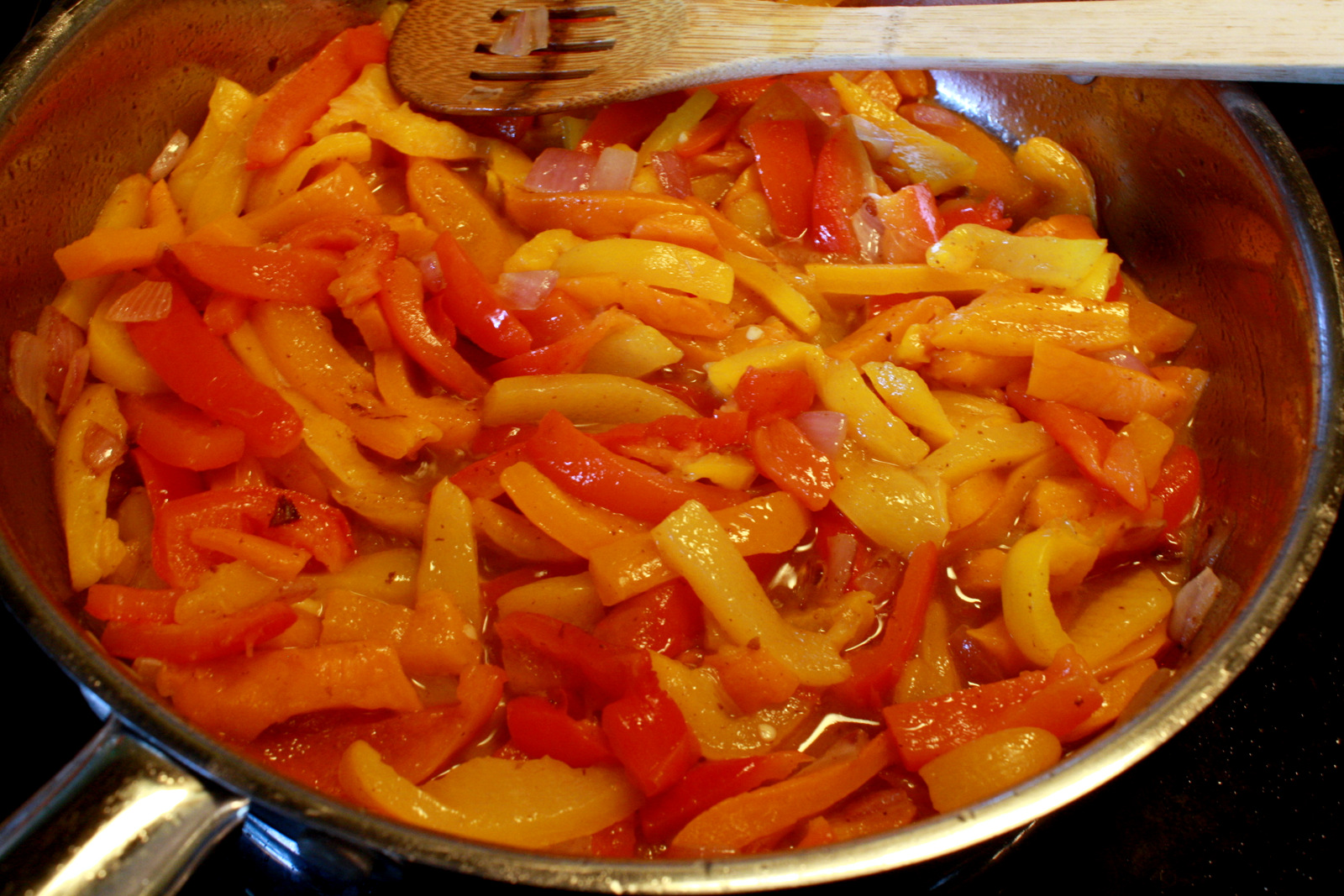 While you are simmering the peppers, begin to cook the pasta.

When all’s done, check the seasoning on the pepper sauce and mix in the pasta, parsley and some parmesan cheese. It will be a little watery but once you put some cheese, it will thicken. The cheese can sometimes stick to the spatula so I only put a small amount and just add more on my plate. 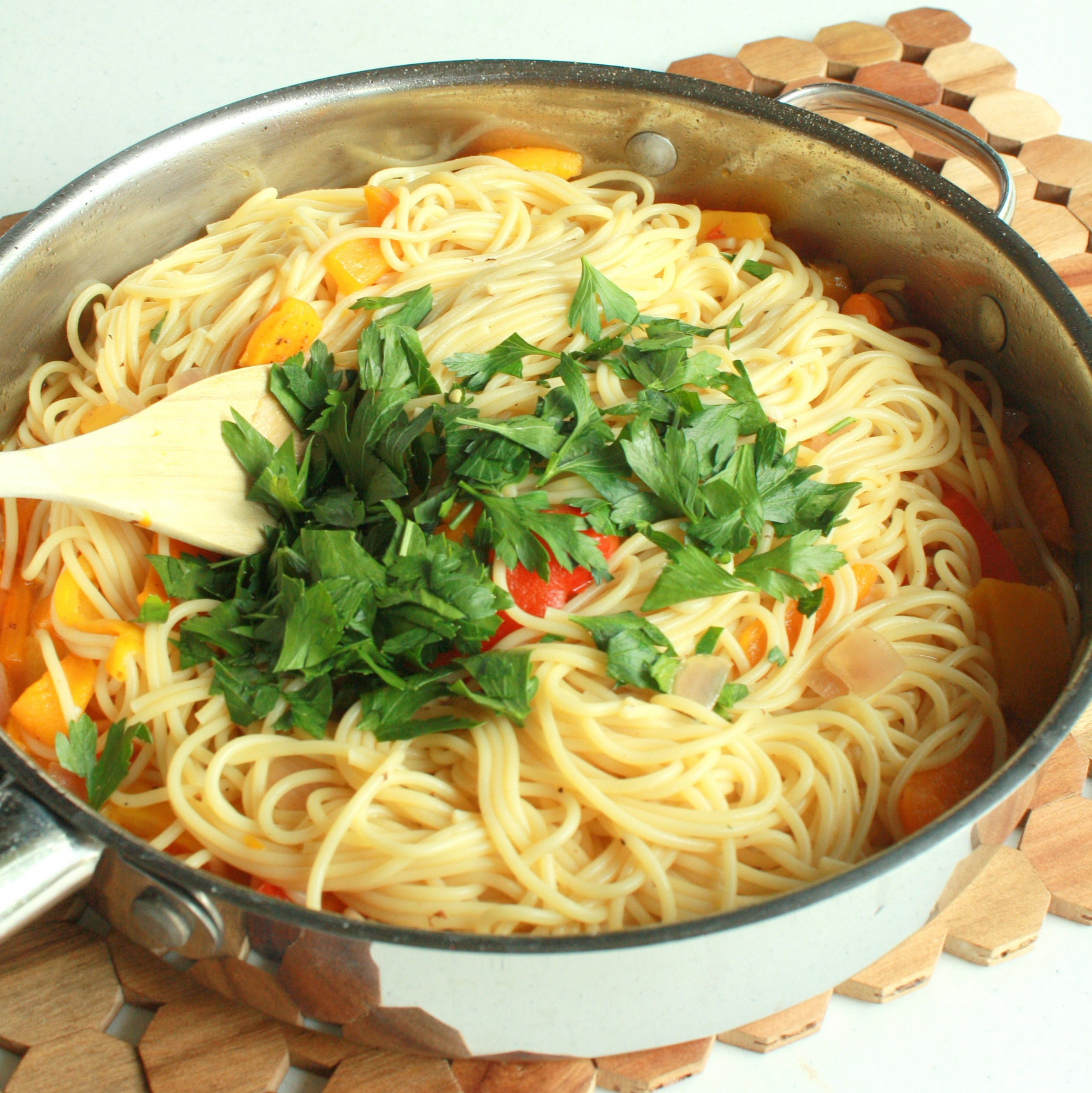 Don’t forget to sprinkle the crumbled bacon on top! Have a fun Italian dinner! 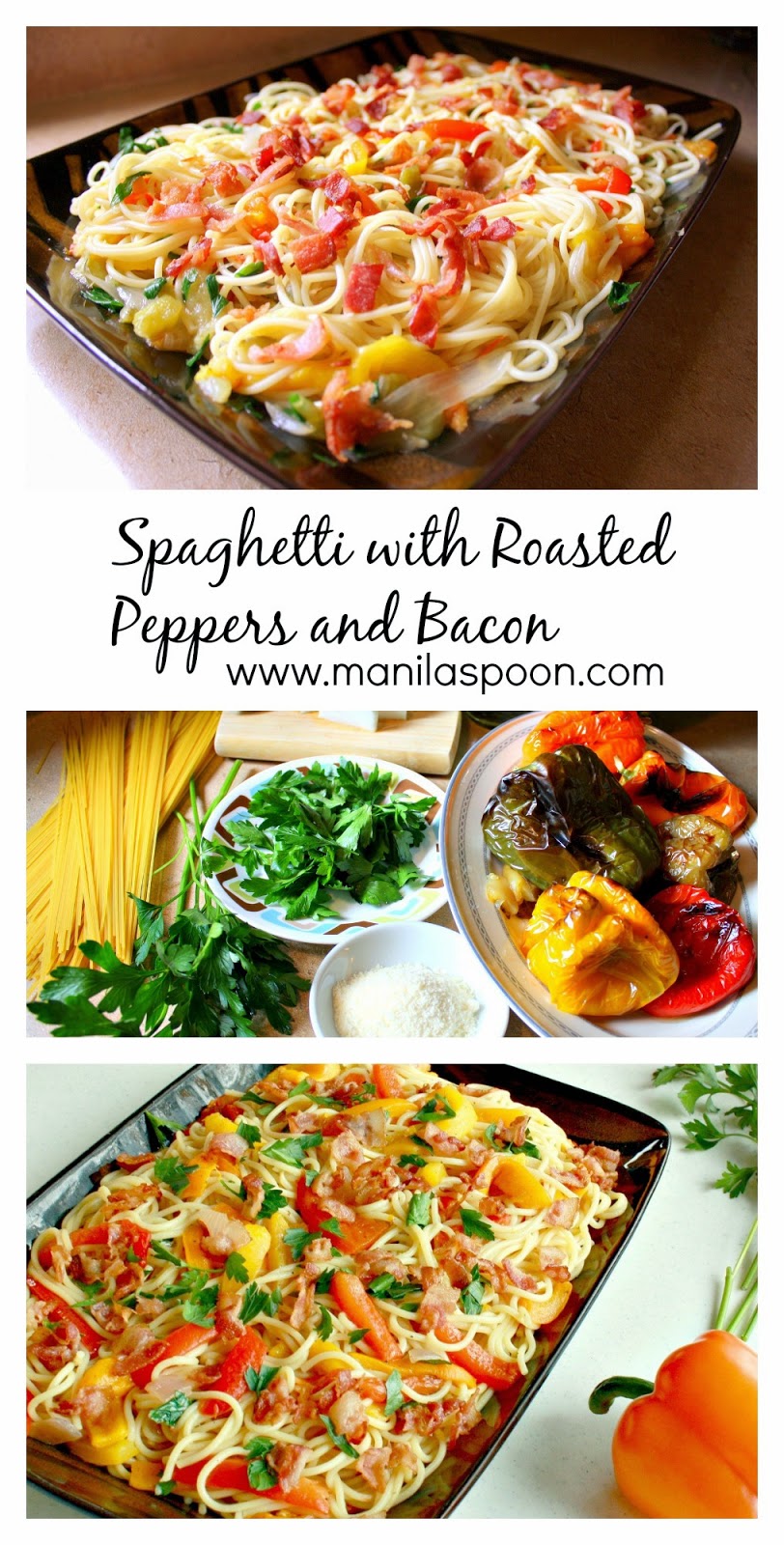 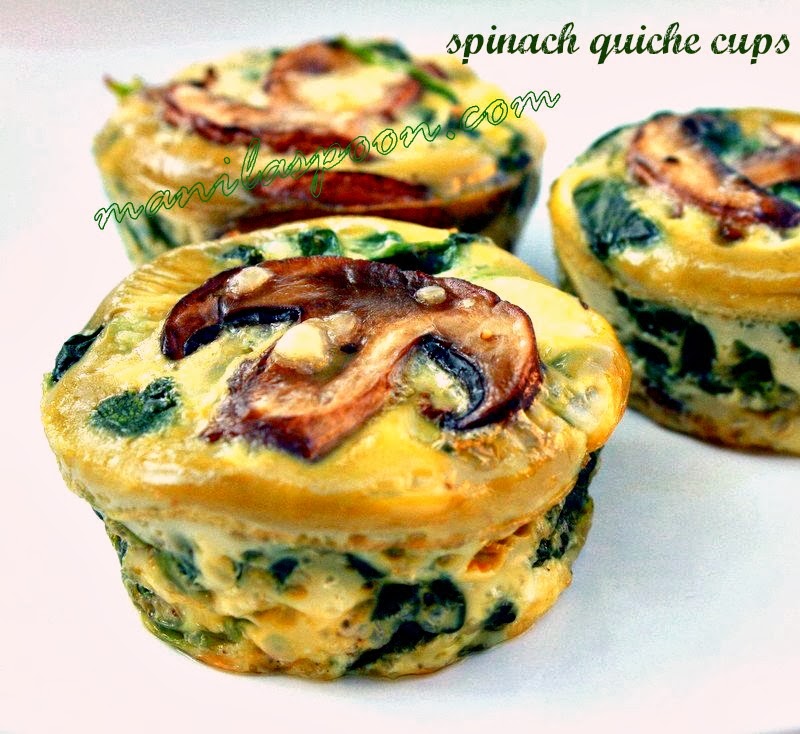 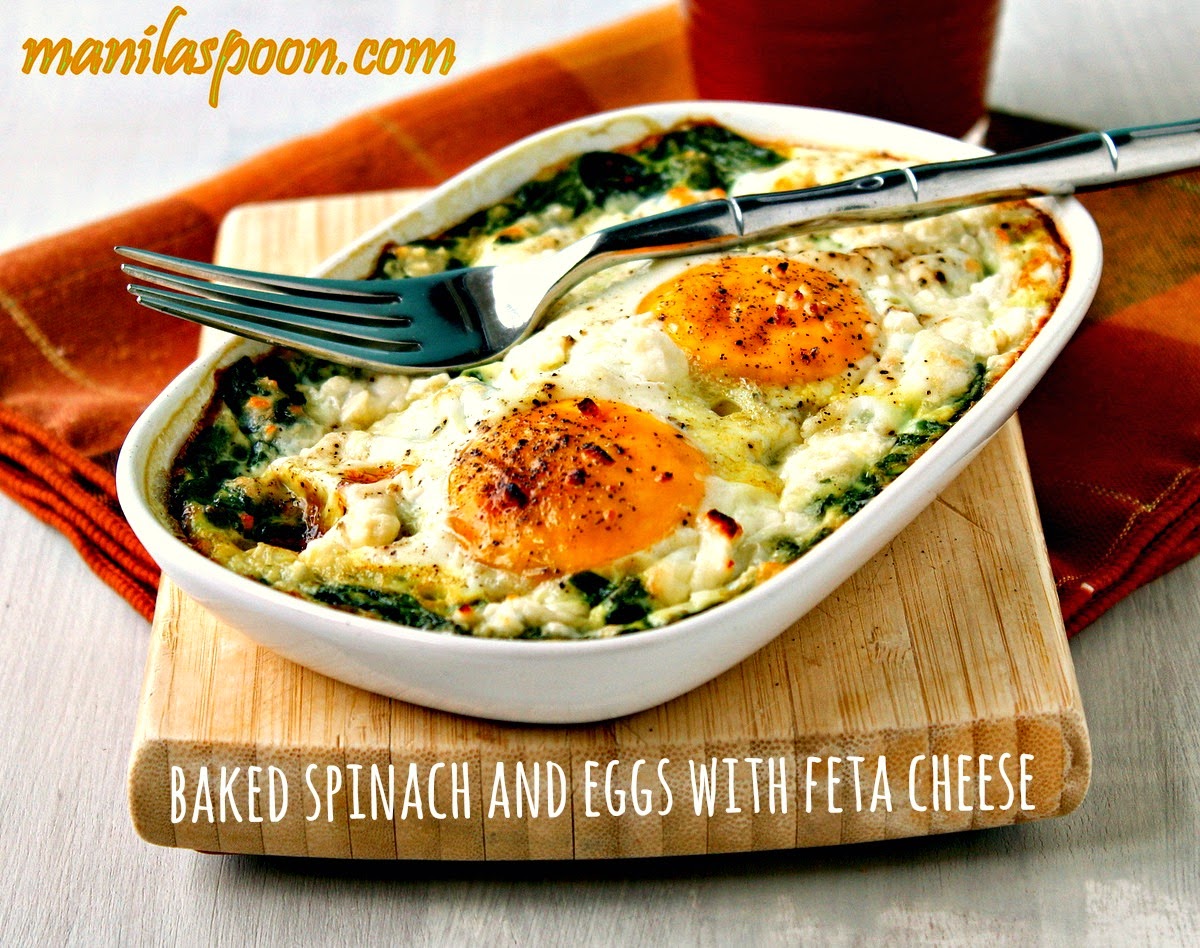 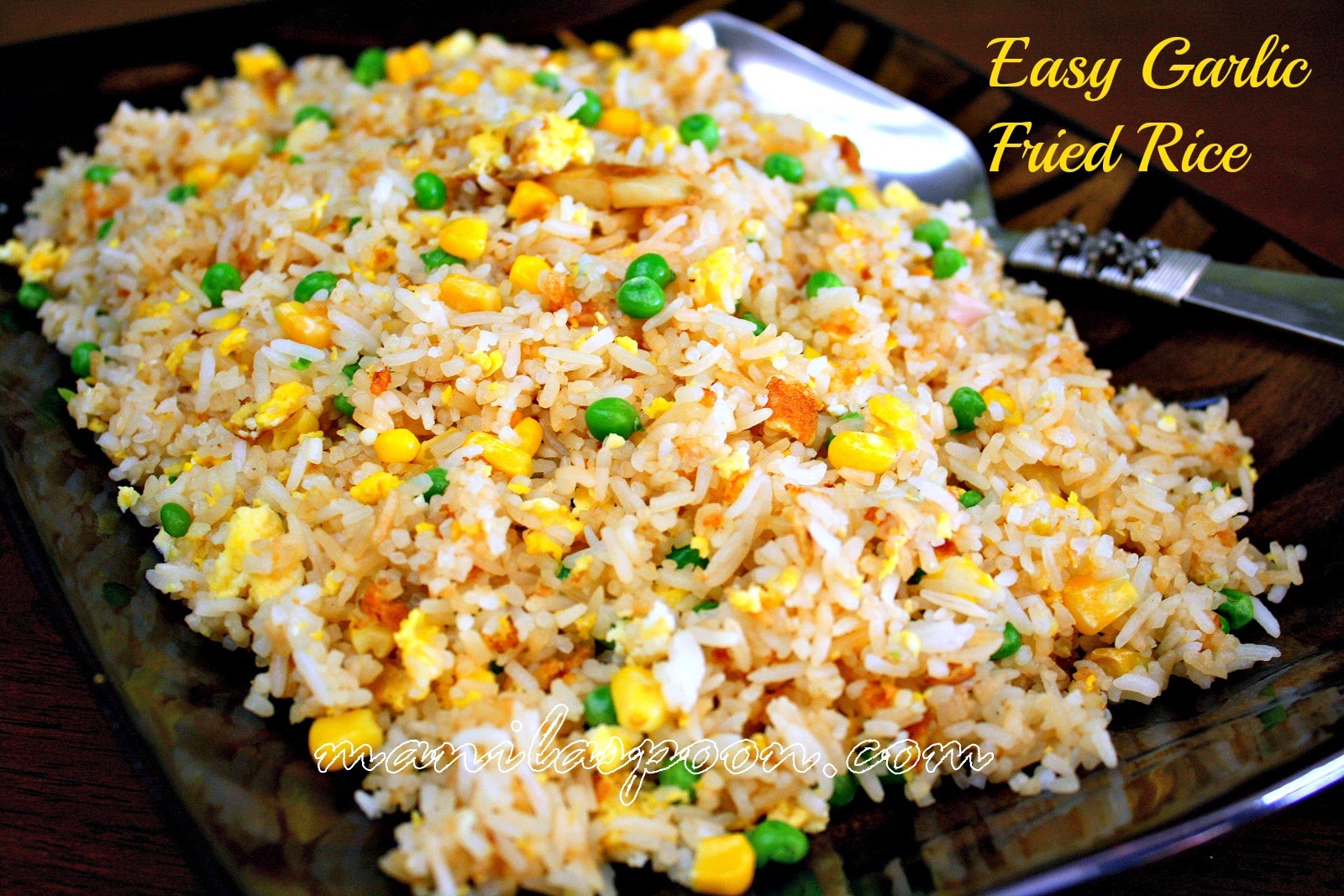