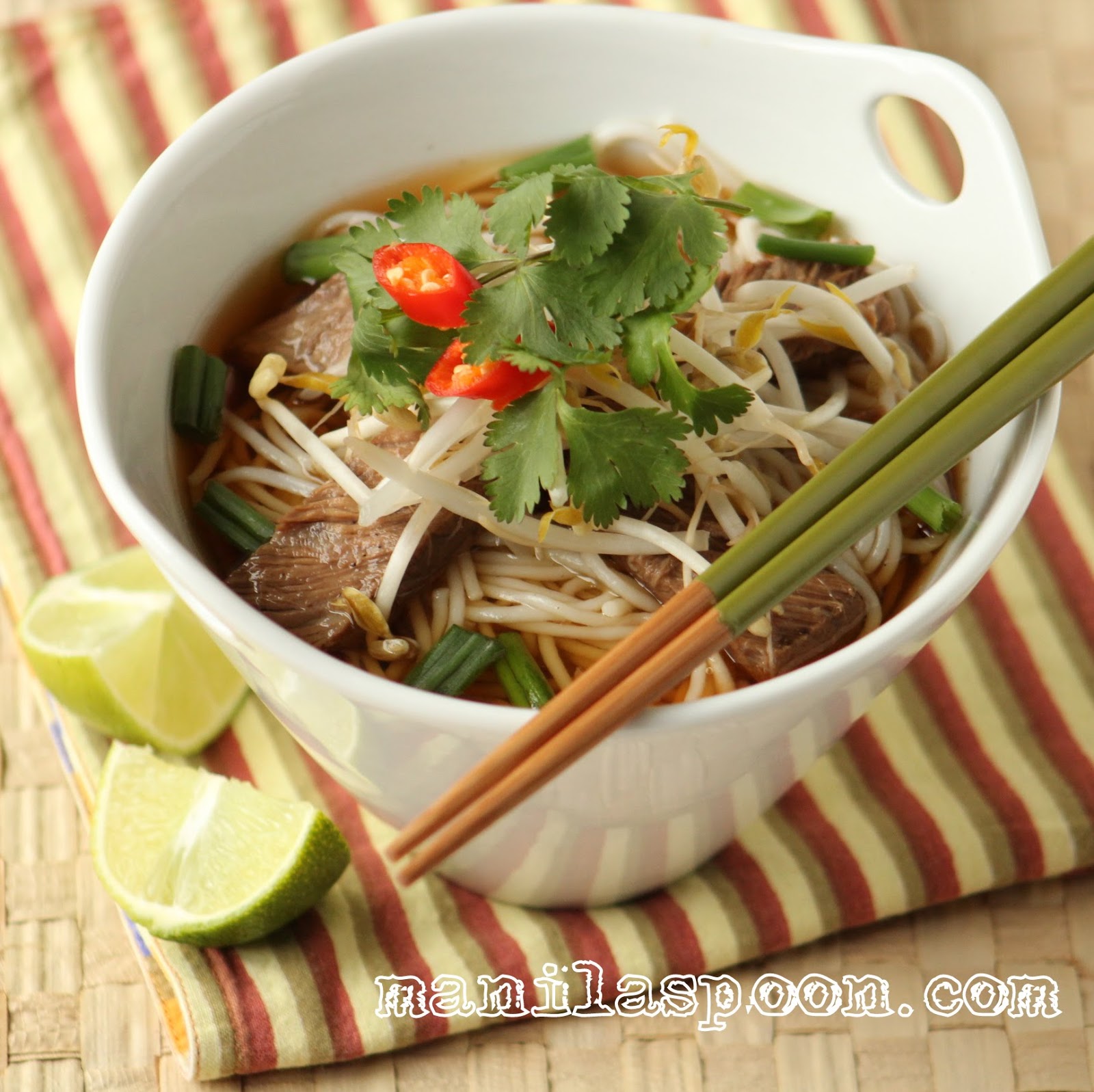 In 2011, my hubby and I had such an amazing trip to Vietnam. First of all it, was a trip that involved only the two of us. Ever since the two tots were born we haven’t done an overseas trip on our own so this was great as an “alone” time with my hubby! At that time, I was pregnant with our third child and so was feeling so nauseous all the time. But thanks to Mark, my hero for sure, he tried his best to make everything more comfortable for me – by protecting me from nasty mosquito bites, making sure I drank lots of liquids and of course, finding the best available food that would help ease the nausea while in Vietnam! Thankfully, I found two comfort food that helped me feel better – Indian Curry and of course, Vietnamese Pho! There must be something about the hot and spicy nature of these dishes that made me forget my nausea or could it just be the time spent alone with my wonderful  husband….?  Anyway, there is so much more I can tell you about our Vietnam trip (and so many photos to show too!) but I thought I’ll reserve that for a travel piece and this time concentrate on food – a classic Vietnamese specialty – the Pho (pronounced as “fuh” and  certainly not “foe”).

But, just to give you a little flavor of Vietnam, here are a few photos to enjoy: 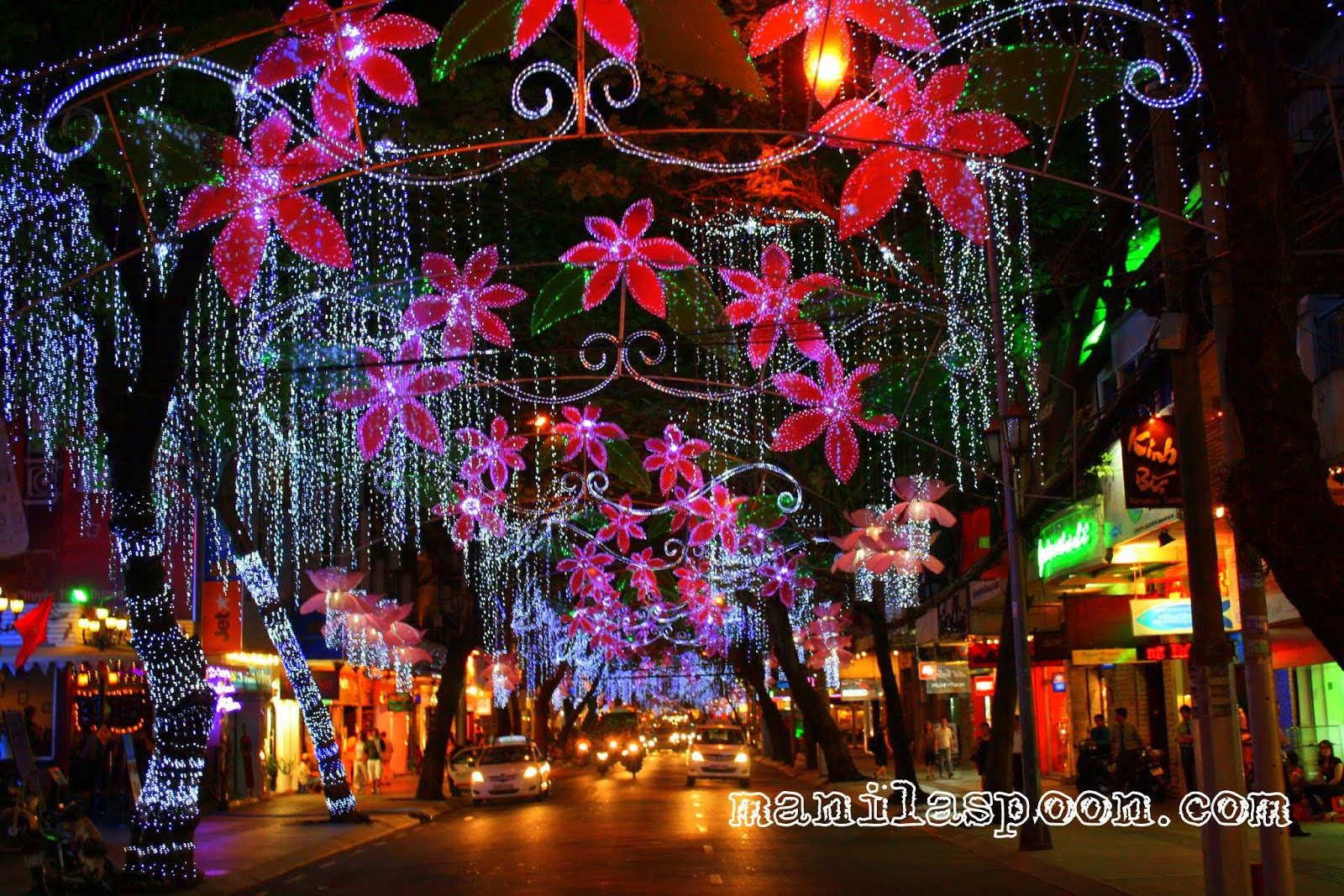 One of the main streets in Ho Chi Minh was lighted up so nicely. I think it was because of the Chinese New Year which was being celebrated at the time we were there. 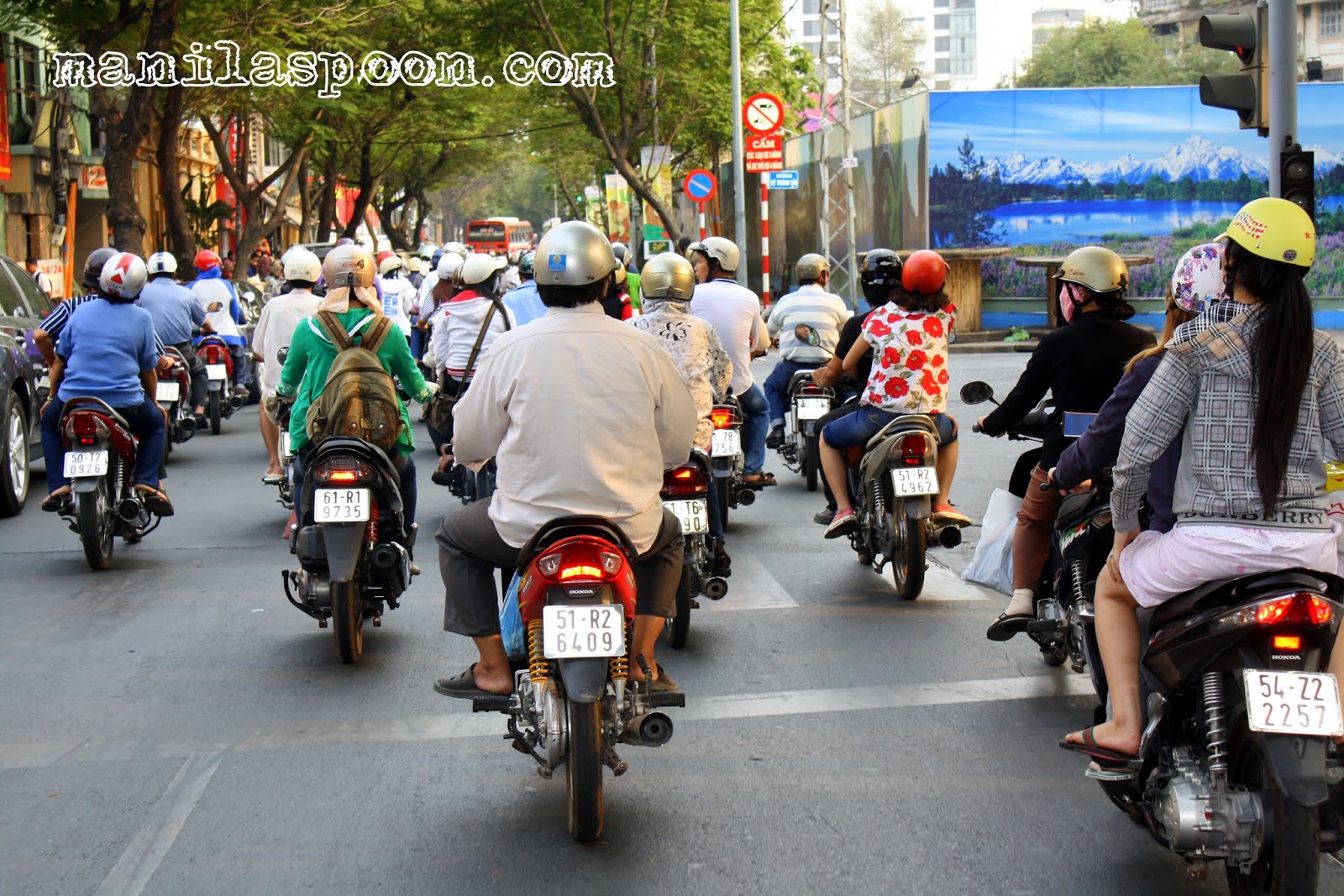 This is what rush hour looks like in the streets of Saigon. 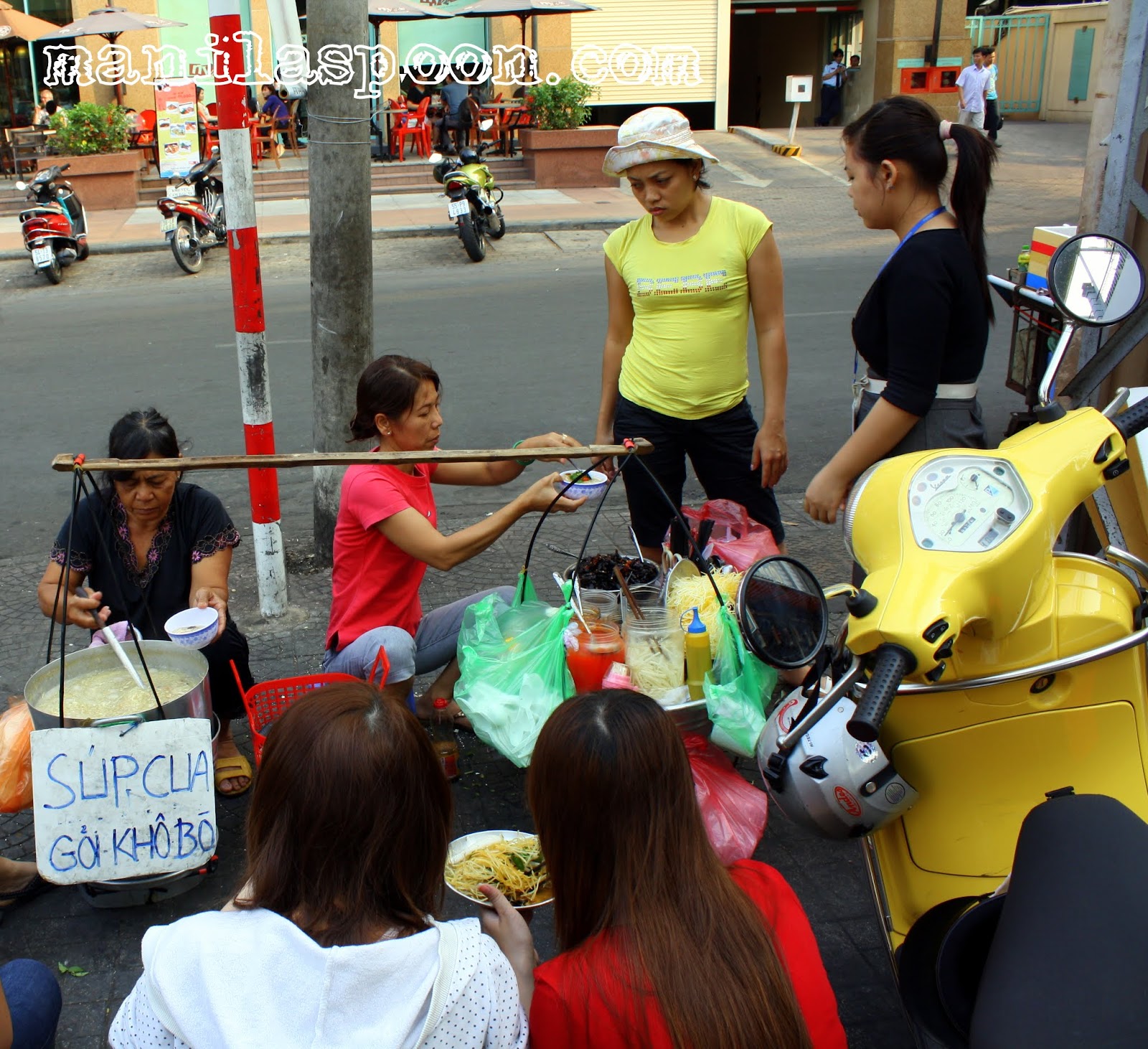 A typical scenery on the streets….lots of food vendors around. Can you see some yummy Pho? 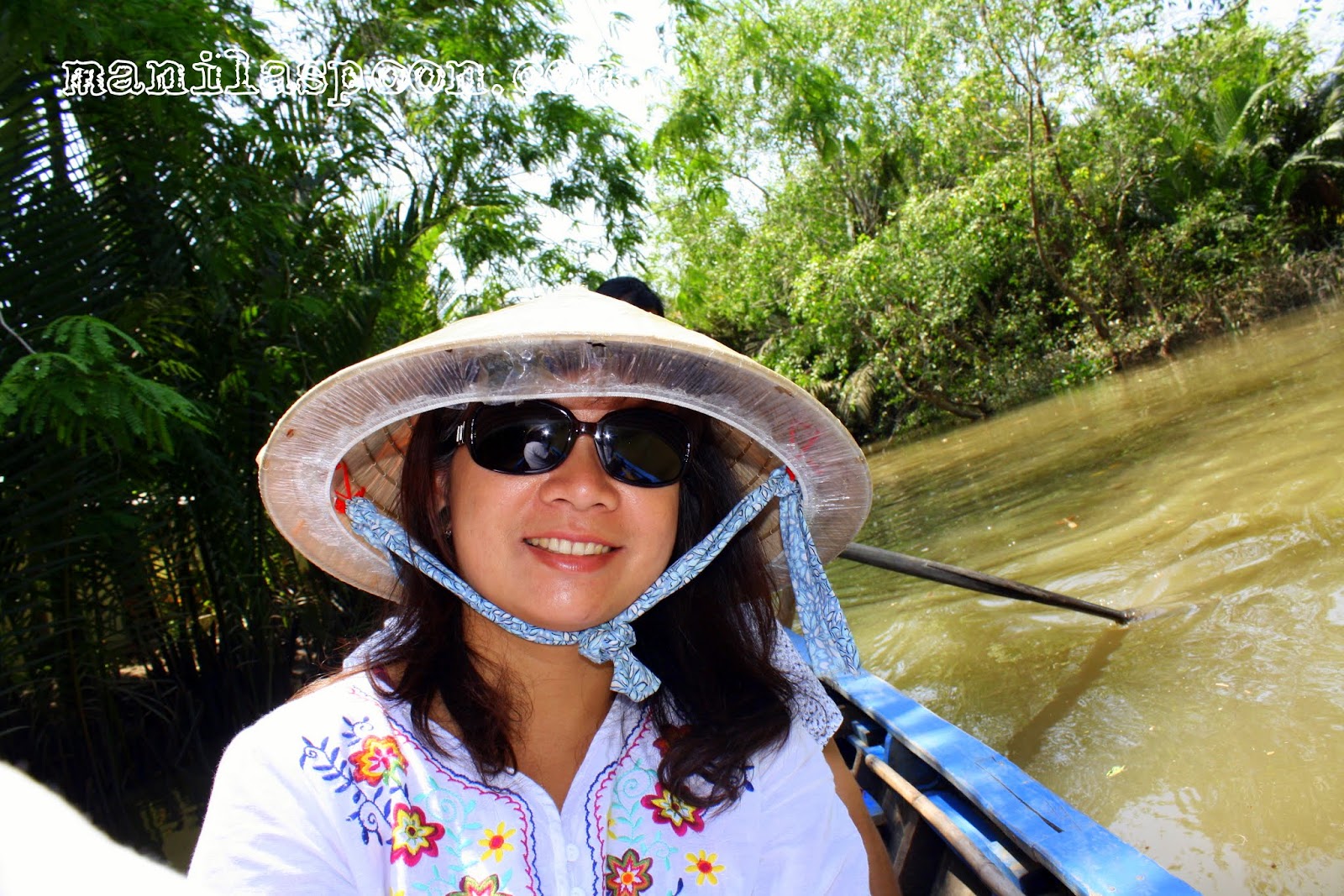 And just me and my Cone Hat as we navigated one of the tributaries of the Mekong River. 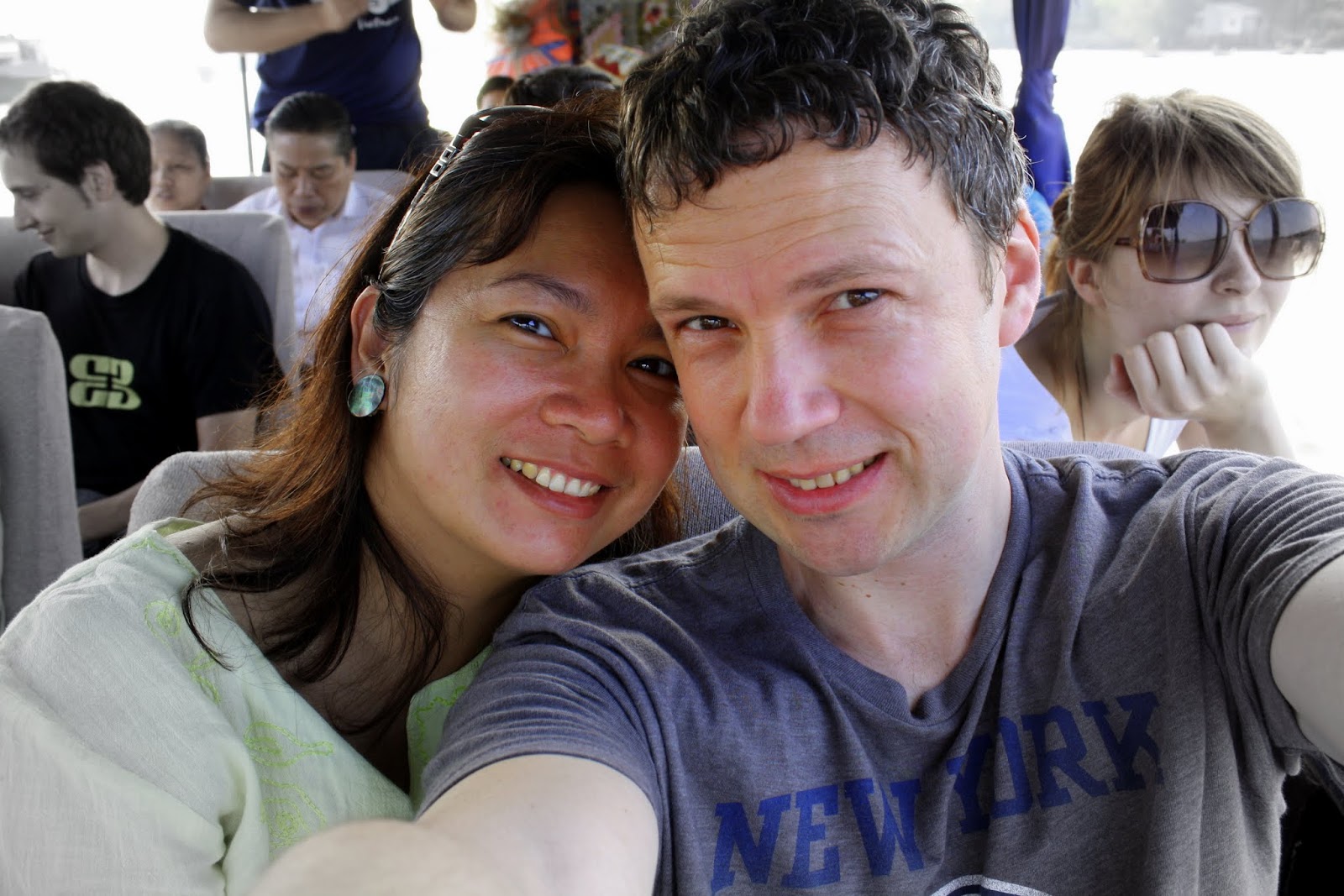 Me and hubby trying hard to make sure we were in the photo as he was using a regular bulky Canon. This was before selfies became so popular. Taken during our tour of the Mekong River. Hahaha – I think we were photo bombed. LOL.

Vietnamese Pho is not a difficult recipe at all though it takes a few hours of simmering to achieve the right flavor for the broth, I must admit. I think 2-3 hours is fine but others do 5 or even an entire day. So, most of the time is really spent on waiting and unless you want to stare at the broth while it simmers (I do that sometimes, hahaha) –  there isn’t much to do. The initial prep takes a little bit of chopping (well just the galangal or ginger, really) but once you have gathered all the ingredients for the broth then the only other thing to do is assemble the rest of the ingredients when it’s serving time. In fact, the broth can be prepared ahead of time (at least a day before) which makes it even easier.

This is an even more simplified version of the Pho – but do not be disheartened or dismayed – despite the short-cut I can promise you it delivers the punch pretty well! I have adapted it to my taste preference hence the addition of soy sauce (which is not in the original Pho). You can leave it out if you wish and use more salt or fish sauce, I think it improves the flavor but it’s a matter of personal taste. The broth (for me, anyway) is just perfectly seasoned and so great when mixed with the other ingredients. It is the true star in this recipe but as with any recipe, I allow you some wiggle room to tweak it to your palate’s fancy. With a little help of fish sauce, salt, soy sauce and perhaps a little brown sugar – you can achieve the tastiest pho in no time! Enjoy!

This will make several cups of broth. We begin with 12 cups of water but as you simmer it uncovered, naturally, it will diminish but there’s more than enough to even freeze for later use!

12 cups of water
2 pounds (1 kilo) of beef chuck, rump, brisket or cross rib roast or a combo, cut into long thin strips or left whole (I have done both ways).
4 Star Anise
3-inch piece of fresh galangal or ginger, peeled
4 whole cloves
1 cinnamon stick
1/4 cup Soy sauce (I added this because I didn’t want to use up too much fish sauce but feel free not to use it if you want a more authentic Pho)
2-3 Tablespoons Fish sauce (or to taste)
1 Tablespoon Brown Sugar
Salt, to taste 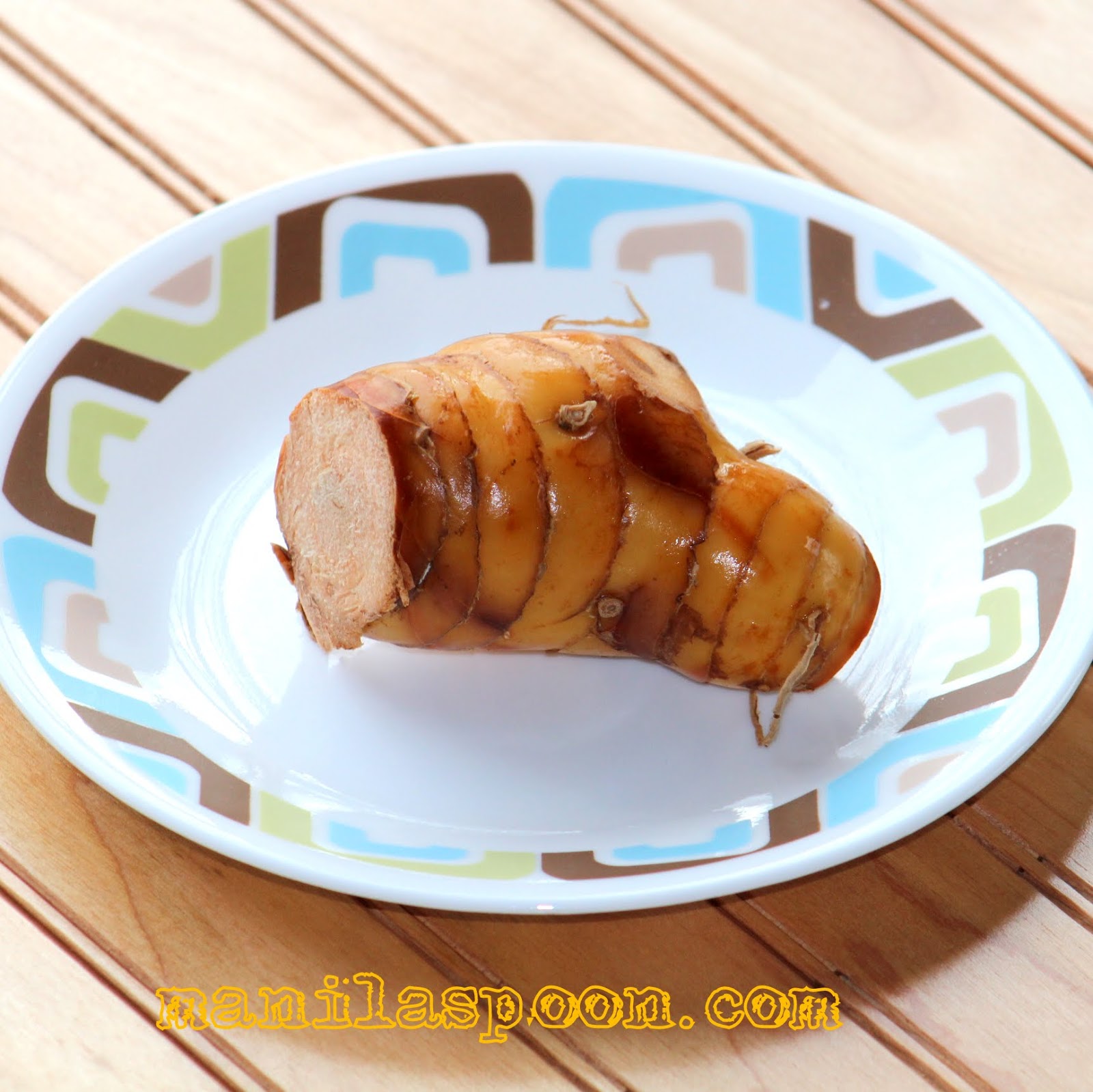 This is what a Galangal looks like. You can find this in Asian stores.

This is what I used for the recipe.

Pho requires a clear looking broth. You can do this by either removing the scum that rises to the surface as the meat boils or parboil the meat for 15 minutes, dump the murky liquid then start again with fresh water and re-boil.

If not parboiling, place the meat into a large deep pan. Pour the water in. Bring to a boil using high heat. Skim off the scum that rises to the surface as it begins to boil. This is to achieve a clear broth. Lower the heat to a simmer.  Add the rest of the ingredients. Cook for about 1 to 2 hours until the meat is cooked to your desired tenderness. You can remove the meat after an hour or so if it is tender enough for cutting. Let the meat cool down before slicing it (if not pre-sliced).

Place the meat in a bowl with cold water for about 8-10 minutes. This is to prevent the meat from drying out and turning dark. It’s also easier to cut up when it’s cold. Refrigerate, if not making the Pho right away.

Continue to simmer for another hour or until you have achieved a delicious sweet-salty, aromatic and intensely beefy broth. Yes, that is possible with patience. 🙂 If necessary adjust the taste of the broth to your liking by adding more fish sauce, soy sauce, a little sugar or salt. It should taste strong since the other ingredients that will be added to the broth are not seasoned.

When you are happy with the flavor of the broth, and you want to have the Pho right away, strain the broth to remove the remaining bits and pieces in it with the use of a fine sieve or strainer. There may still be some fat left on the broth so if you’re not in a hurry, leave the broth on the fridge overnight (after straining it) and then the next day, skim off as much fat that has floated to the surface before reheating it.

Assembling the Pho – the key here is to prepare all the ingredients ahead of time so they’re all ready when the time comes to assemble them.

1 pack of Rice Vermicelli (about 250 grams) – cooked according to package directions
1 pack of bean sprouts (rinsed well)
A small bunch of fresh cilantro, chopped
4 scallions or green onions, sliced thinly
1 Fresh Red chili, sliced thinly (really spicy so you need to use only one tiny slice per bowl)
Lime, a few drops of freshly squeezed lime juice, to taste

While noodles are cooking. Slice the beef into thin strips (if not pre-sliced). Reheat it with the broth.

Place enough noodles in a bowl. Divide the noodles among 6-8 bowls (depending on their size).

Place the heated beef strips on top of the noodles. 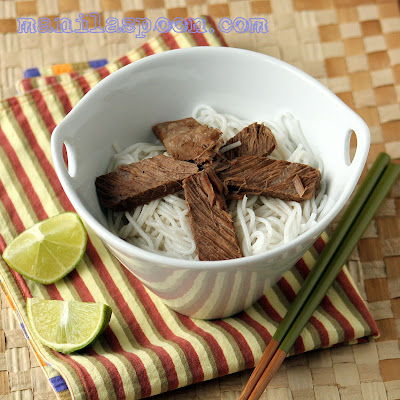 Add some bean sprouts, a little chopped cilantro, a few green onions and and a few slices of red chili on top. Be aware that this little red chili is really spicy so perhaps 1 one piece sliced is enough! You can remove the seeds from the chili, if you wish, too. 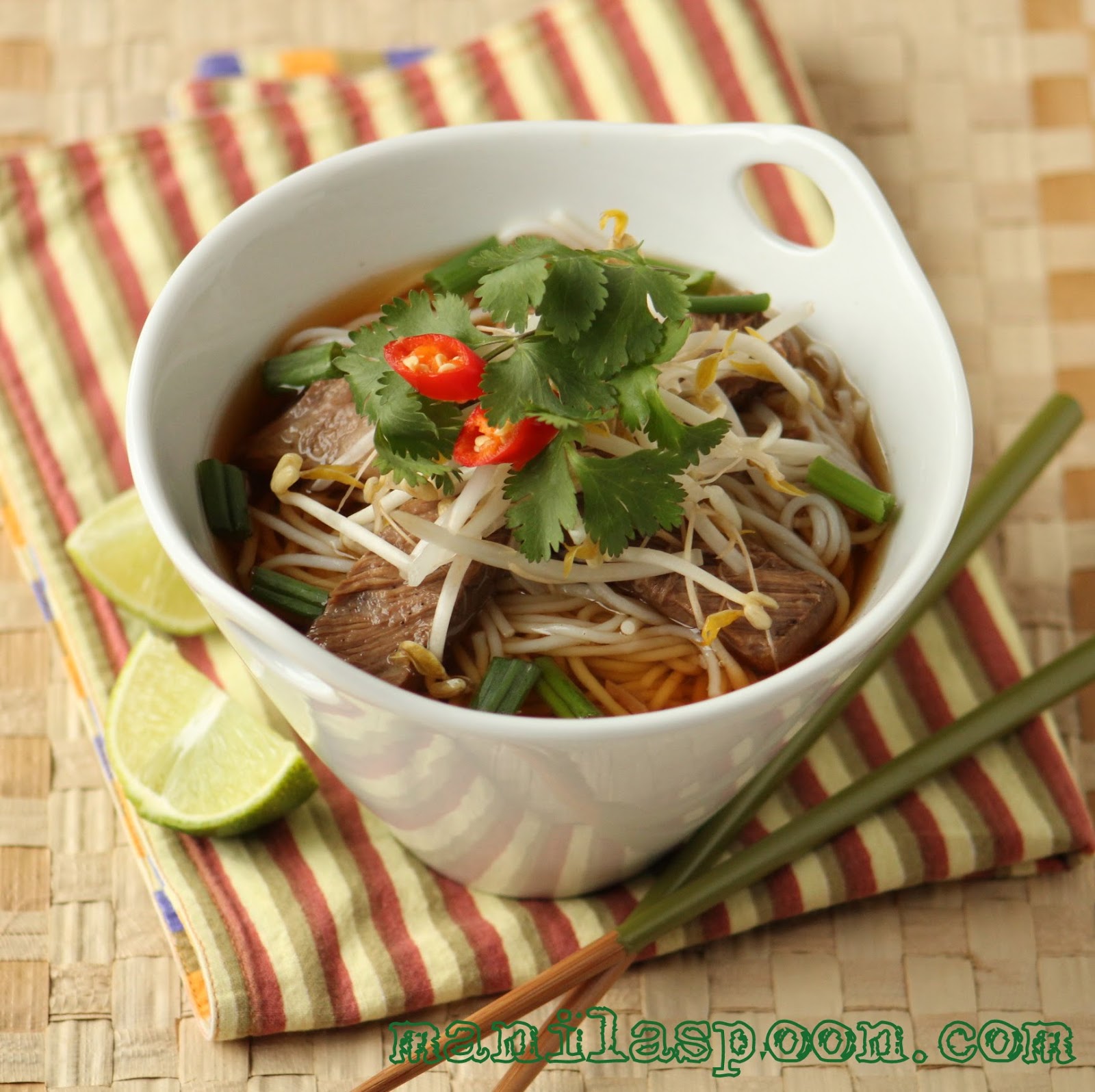 Squeeze a few drops of lime juice to the mix, if desired. I love the freshness of the lime juice so I highly recommend it! Are you ready to dig in? Enjoy! 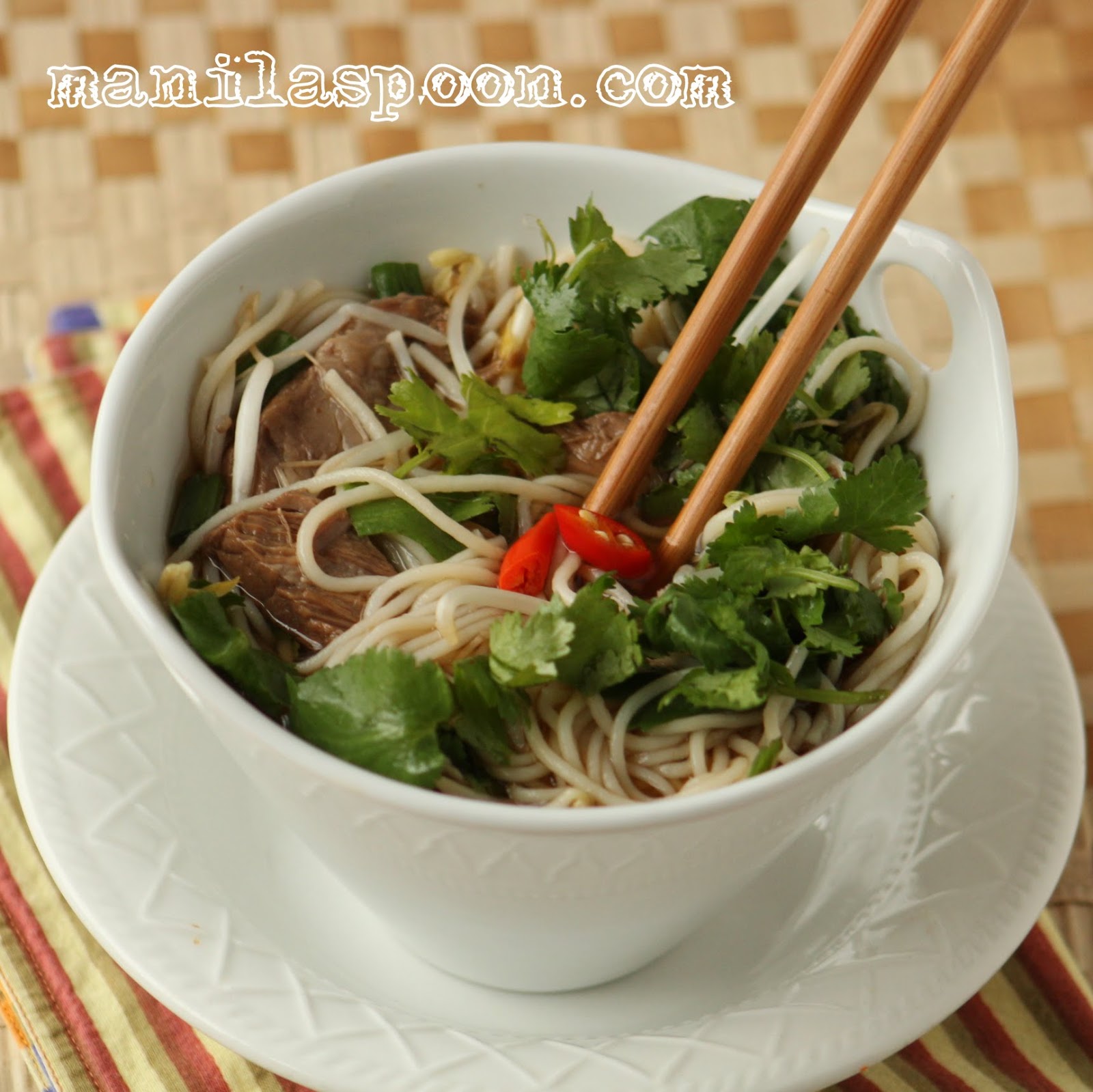 If you like what you see and would like
to receive new recipe updates we’d love you to subscribe to our posts and join
our site. Also do like us in Facebook so you can get the latest updates and so
much more. Thanks for visiting and happy browsing!