This is seriously the easiest and tastiest chicken inasal recipe! Chicken Inasal is the Philippines’ famous barbecue or grilled chicken. The marinade made from vinegar, lemon and sprite permeate the entire chicken making it both tender and tasty. The basting sauce not only adds vibrant color to the meat but also a lot of flavors that you’ll want to eat all of the chicken skin that gets so crisp and delicious! This can be roasted in the oven or grilled.

Before hubby met me, he only ate chicken and beef when it came to meat products. He didn’t like eating fish or pork for that matter. Thankfully, after being married for nearly 17 years his tastebuds have improved some and now he eats seafood and pork, no problem – I call that a success! So, what’s my point and what does it have to do with a yummy chicken recipe?

When he first came to the Philippines, he was worried that he may not be able to eat that much being unfamiliar with our food culture. Yes, he may find a lot of chicken and beef dishes there, but what if they’re not to his taste(s)? To ease him into our food, we didn’t give him anything too exotic right away. I knew he loved chicken so I started introducing to him dishes made with it.

Chicken adobo, being our Philippine national dish, he had to try it first and I was glad he enjoyed it. To this day, when we go to a Filipino restaurant, adobo is always included in the order.

Honestly, I don’t know anyone who doesn’t like our chicken adobo! Then after that, he probably had some chicken afritada, even Jollibee’s chicken joy (incidentally, there’s now a branch of Jollibee in Manhattan right across the New York Times building!) and his favorite fried chicken of all time Max’s Restaurant’s Sarap to the Bones fried chicken!

We actually went to Max’s restaurant for my birthday this year. It was in March and the quarantine just started that day so we were not allowed to eat in but had to eat our fried chicken in the car!!!

Still, it was a fun and definitely a memorable birthday (celebrated inside the car!)!

But there was one Filipino chicken dish he could never forget and totally loves. Every time we go back to the Philippines, he’d request me to bring him to Bacolod Chicken Inasal Restaurant in Makati. It’s essentially the most famous Filipino chicken barbecue or grilled chicken that originated from the central Philippines and is now hugely popular all over the country.

How can it not be so popular? One bite of this tasty, juicy chicken and you’re hooked, just like my hubby and me! And it’s quite an eye-catching food with that deep and bright yellow-orange hue!

Look at this yummy grilled version below! 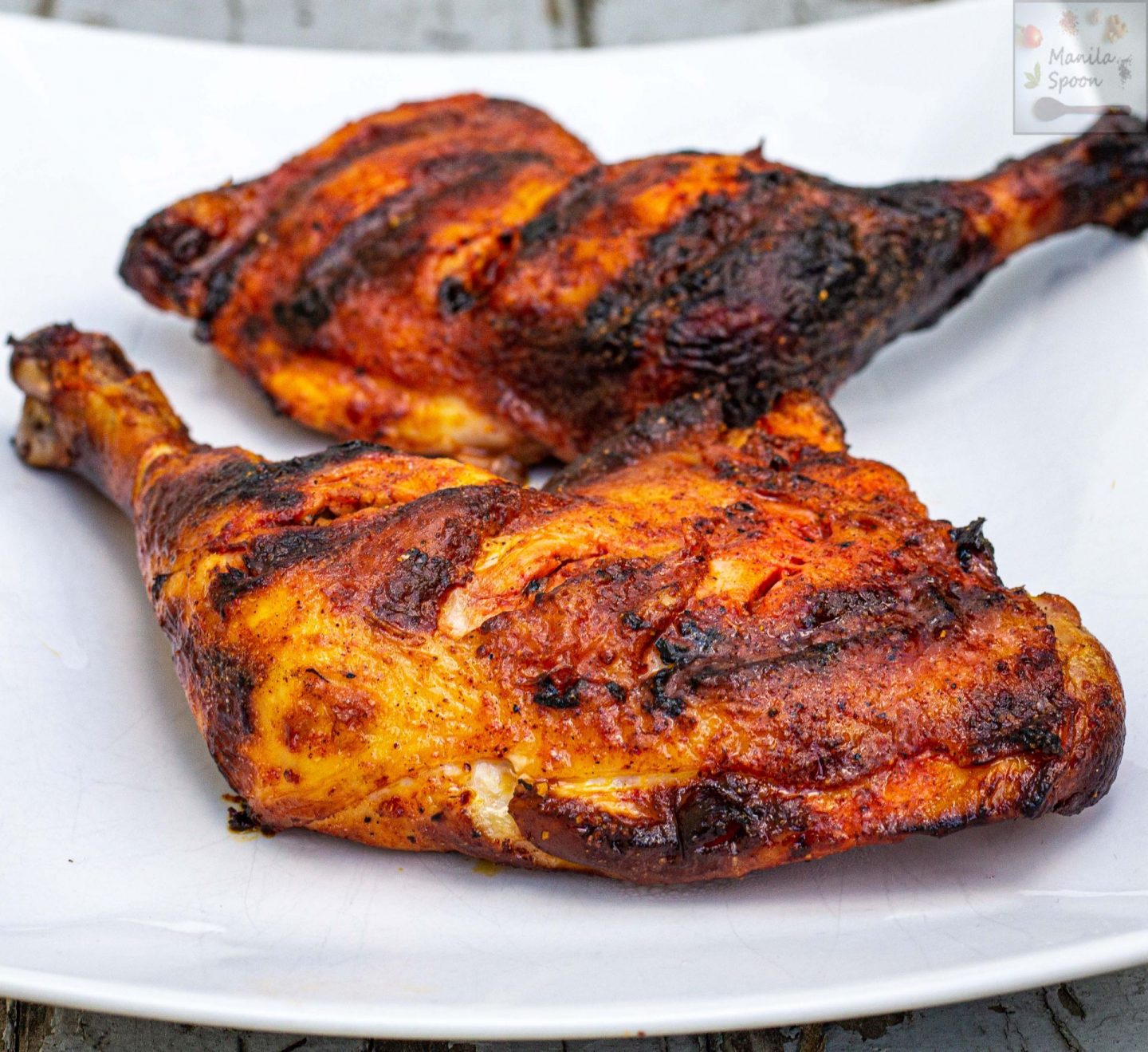 I thought that I would only be able to enjoy Chicken Inasal while vacationing in the Philippines and not when I’m back in the US. But thankfully, a very dear and sweet friend of mine, who hailed from Bacolod City kindly shared with me her favorite recipe of Chicken Inasal – an authentic and delicious recipe straight from the place where this chicken dish was first invented! Wow!

However, I had to tweak the recipe a little because I couldn’t find the local lime we use for this in the Philippines called calamansi – it’s smaller than key lime but wow, it’s so high in taste and tanginess in the citrus scale if there was one!

I subbed with lemons and I think I still captured the essence of this lemony chicken. But, believe you me, the secret to this chicken’s tenderness and juicy-ness is not even the local calamansi lime but the very exotic ingredient called “SPRITE!” (or any lemon-lime soda for that matter!).

It’s pretty common in the Philippines to use 7 UP or Sprite for grilling as not only does it add sweetness to the meat but it tenderizes the meat!

Traditionally, chicken legs, quarters or breasts pieces are used for the recipe but I experimented with a spatchcock chicken and it worked perfectly too, as you can see. In the Philippines, Inasal. is always grilled but I thought I would try it first in the oven? It was still so cold to grill outside when I made my first attempt at Chicken Inasal so I tried oven roasting it first. And it worked so yummy and it was crazy easy as well – no need to constantly check if the chicken in the grill is already done and no fear I may not be able to cook it properly. It was roasted perfectly after 45 minutes at a 400 degree F oven. 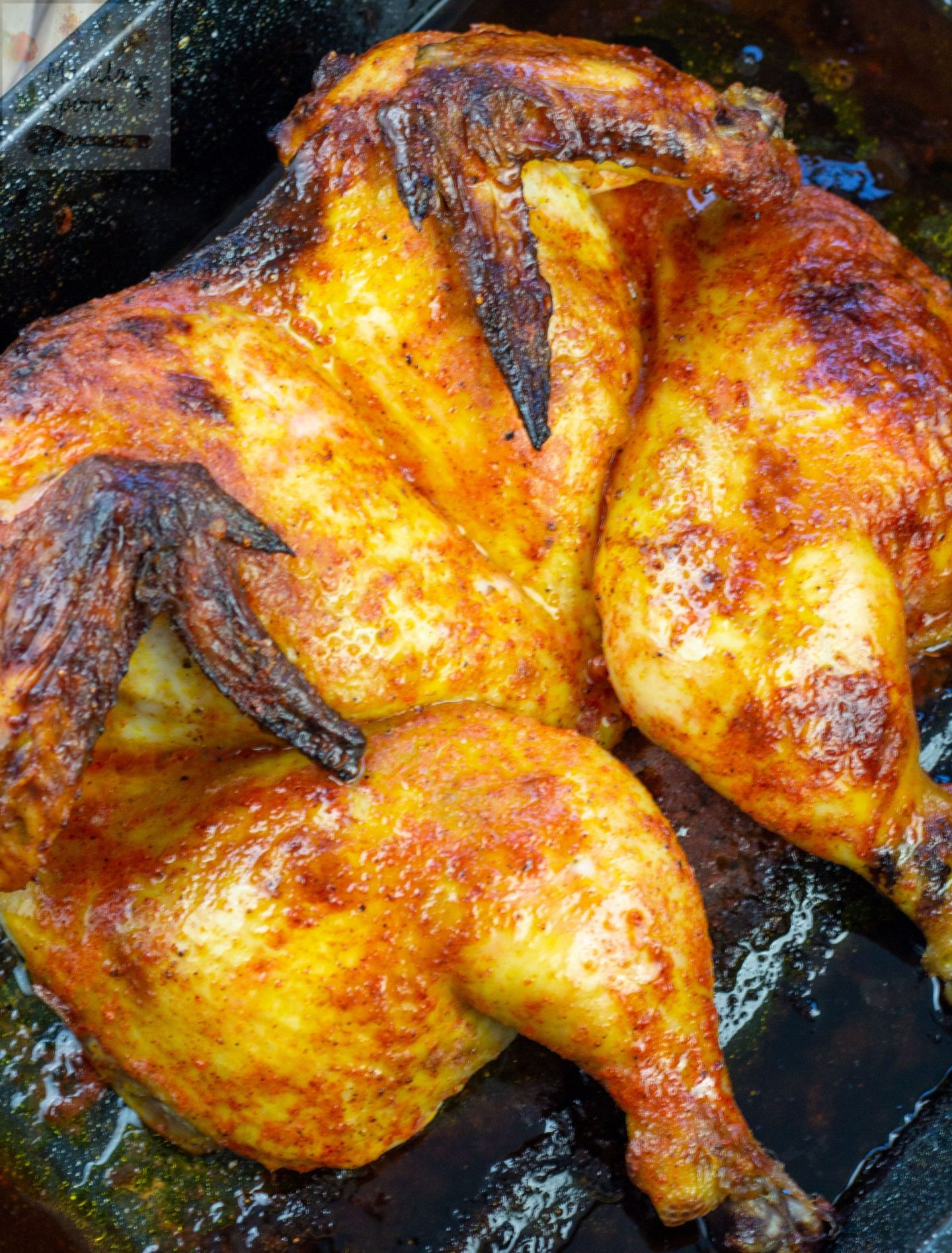 I say it’s easy to make because all you need to do is simply marinade the meat for at least about 3-4 hours, then roast in the oven! The ingredients are not even hard to find at all. The annatto seeds (which you use to get the annatto oil for color), I simply replaced with annatto powder which you can find in any Mexican or Asian store – not a crazy exotic ingredient at all! The rest are common and easy to find ingredients that may be in your pantry already! Just don’t forget the Sprite or 7 UP, whichever is your preference – that’s very important.

As you can see the chicken is truly yummy, juicy, and just packed with a lot of flavors. So next time you are looking for a new chicken recipe for oven roasting or grilling for summer – you got to try this!

This is seriously the easiest and tastiest chicken inasal recipe! Chicken Inasal is the Philippines’ famous barbecue or grilled chicken. The marinade made from vinegar, lemon and sprite permeates the entire chicken making it both tender and tasty. The basting sauce not only adds vibrant color to the meat but also a lot of flavors that you'll want to eat all of the chicken skin that gets so crisp and delicious! This can be roasted in the oven or grilled.