Sweet, fruity with a hint of lemony tang and perfectly spiced with cinnamon and nutmeg this Easy Slow Cooker Apple Crisp is simply the best! So easy to make, simply mix and dump and let the slow cooker do the work for you.

A friend of mine named Debbie makes the most delicious apple crisp that my family is totally crazy about.

When she brought over her apple crisp for one of our ladies’ fellowship meetings I asked her what she added in her recipe that made it so fresh and truly flavorful. 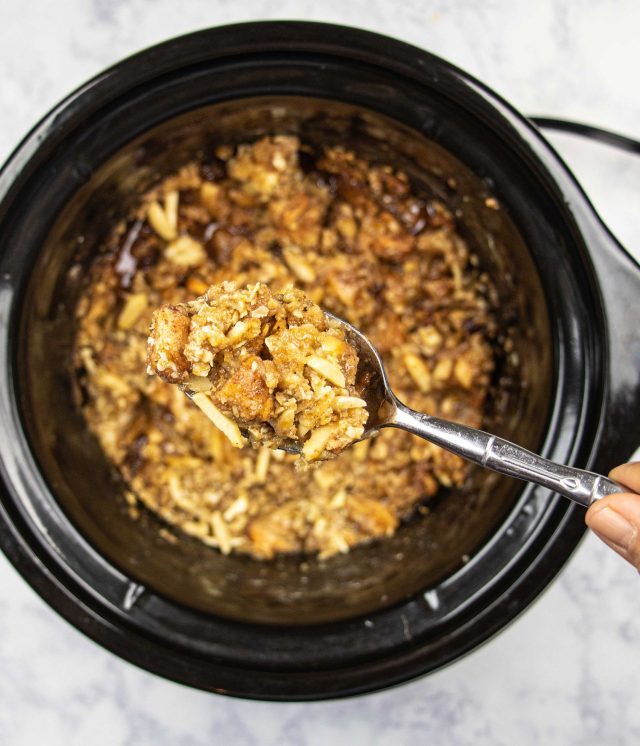 She kindly told me she used fresh lemon juice and a combo of cinnamon and nutmeg. The best part for me was that her recipe was also completely gluten-free which means my whole family could enjoy it as one of us is trying to do a more wheat-free diet.

With the info she gave me,  I set to re-create her amazing apple crisp but this time in a slow cooker version. I’ve previously made it for the oven but I thought that for busy days it would be great to have a crockpot version, too. If you want to try the stovetop version you can find the recipe here.

I believe I nailed it! Yay! The measurement may not be exactly the same as hers but the delicious sweet-tangy flavors are certainly there!

What I did was really used a lot of lemon juice. While other recipes called for perhaps just a little tiny bit of lemon juice if at all, I used the juice of an entire lemon (quite smallish) or roughly 2 tablespoons at least. I also upped the cinnamon to 2 teaspoons and used 1/2 a teaspoon of nutmeg.

I know this amount may seem a lot for just for 5 apples but trust me, once it’s all cooked and done – the flavors just truly sing and especially when you enjoy the crisp with a little pouring cream (I prefer this!) or ice cream.

What a delicious contrast of flavors and because the apples are strongly flavored – it doesn’t get lost in the ice cream – it’s still quite prominent and so yummy!

And the result is a delicious apple crisp which not only has the signature crunch but is truly full of yummy flavors – sweet, fruity with a hint of lemony tang, and perfectly spiced with cinnamon and nutmeg, too.

You definitely must enjoy this slow cooker apple crisp warm and drizzled on top with either some pouring (heavy) cream or ice cream! Pure heaven!

Sweet, fruity with a hint of lemony tang and perfectly spiced with cinnamon and nutmeg this Easy Slow Cooker Apple Crisp is simply the best! So easy to make, simply mix and dump and let the slow cooker do the work for you.